I originally heard about the race last year and immediately liked the sound of it, the sea to Snowdon via Wales’ four other 1000m peaks, what’s not to like! A unique event for its A to B route and summit finish. At 20 miles (not including the run/walk back down after the summit finish…) it’s a long one too. This was also the 50th edition of the race which was started in 1971 to mark the countries decimalisation.

For the start you are bussed out from Llanberis to the coast at Aber, and due to Covid the start was in waves according to estimated time. In the final wave there was a very fast starting local runner which I struggled to stay with, but just about kept him in sight which helped me not to get lost!

The first climb was tough, no real path, a trudge through the thick grass. I slowly reeled the fast starter in to take the lead over the first peak (Carnedd Llewelyn) then enjoyed the small descent before the out and back climb to the next peak (Carnedd Dafydd).Heading back I could check my lead and also saw Ambleside runner James Harris going well. Unfortunately in the process of saying hi I took a small tumble but nothing major.

As well as long climbs there are a couple of long descents on the route, the first down to the A5 at Ogwen. Needless to say it was a scorching day and this is where it really started to hit lower down in the valley. Thankfully there was a water station and despite having fully topped up both bottles from a steam another full top up was required.

After a short stretch on the road the next climb was hard, stone steps then a little scrambling really drained the energy. The heat was relentless, another stream, another top up. Higher up a slight breeze was most welcome and enabled me to push on a little again.

Summit reached (Glyder Fawr), dibber dibbed, marshals thanked and the second big descent was underway. Looking at my elapsed time I thought I could be on for close to a 4 hour finish, however as the descent went on and the heat built up again I soon started to feel the legs. 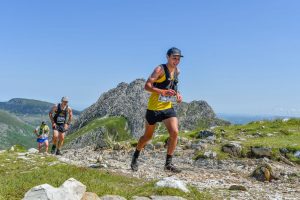 With another water top up at Pen-y-pass I set off up the PYG track to Snowdon thinking I was nearly there. By now it was the most scorching part of the day and the heat really sapped any remaining energy. I barely ran, mostly just walked and stumbled past the line of tourists snaking all the way to the summit. It took many distance/time recalculations, another couple of stream top ups and cap soaking to get me up to the Finger Stone at the col.

Despite Snowdon being so close at this point you need to turn around and do an out and back to tag the penultimate summit (Garnedd Ugain). On my return I saw James Harris and realised he was finishing strongly, having eaten into most of my lead on the final climb. As such I found a little left in the tank and attacked the last stretch up to Yr Wyddfa hard! With some great support from Keswick AC spectator Tom Partington, I managed to finish in 4hrs21min, the fastest time on the day.

This was the hardest race I’ve done, not only due to the conditions but also what is a very tough course, harder than many of the Lakeland Classics. This sentiment was shared at prize giving by Colin Donnelly and Josh Naylor, both multiple winners of the race, who were there to celebrate the race’s 50th edition. I look forward to my next outing! 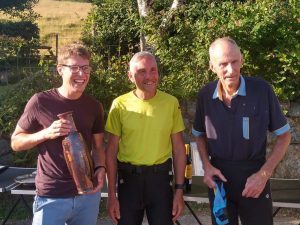 Matthew (along with his prize vase), Colin Donnelly and Joss Naylor