I am the only Tonkin to make it through the festive period and not catch the dreaded ‘rona. My youngest sister Esther, or Betts as she’s affectionately known, was first to get it and had to isolate at her boyfriend (Harrison’s) house. Making this the first year she wasn’t at home for Christmas. My other sister, the international rugby sensation, Evie Tonkin, was next. She went slowly mad being trapped in her bedroom at my parents house. Norm picked it up between christmas and new year. Then me mam tested positive on New years day. Luckily they all had it pretty lightly, and made relatively quick recoveries.

Before Christmas Harrison had entered his first fell race, Kong’s S.O.B. Between Christmas and New Year, I suggested we go for a recce. He’d just arrived back from his latest stint at sea, and wanted to test out his christmas present from me. A Pete Bland bum bag. He did very well and was like a kid in a sweet shop on the descents. He finished the recce looking very excited for the race, I on the other hand was mildly concerned I might get beaten!

With my parents isolating, Betts and Harrison came and stopped at mine the night before the race. Hector was over the moon to have visitors come to stay. I introduced Harrison to my new pre race ritual, a shot of Demonovka (a spirit from the homeland of my good friend Boris) and pasta for tea. Since I adopted this ritual I’ve always managed to finish within the top 20 of all the races I’ve done. We spent the rest of the night playing Kerplunk and Rummikub, my two favourite board games.

The morning of the race arrived and the weather was grim. I gave Harrison all the kit he’d need for the race, ate breakfast then sorted Hector out. The downside of being a dog owner is fitting their exercise in with yours when you’re racing. I took Hector for a lap of the block before we set off for the race, which loosened my legs a bit. The weather wasn’t filling me with much motivation at all. When we arrived in Braithwaite, Harrison seemed amazed at how many people I could find to talk to. He kept asking me “Do you know them or is this just what fell runners do?”. I sent him in for his number and then explained what he’d need to do with his contactless dibber. He then spent the next 20 minutes trying to decide whether or not to wear his glasses. Once he was sorted he went to find his parents, who’d driven up from near Preston to come and watch.

As we were warming up I suddenly became aware of the extra Christmas and New Year weight I was carrying. “Oh this is going to be horrific” I thought “The climb up Stile End is going to kill me today”. As I was mentally beating myself up I saw Ben Abdelnoor, dressed in a lovely old school farmers waterproof jacket, waterproof pants and wellies. I wished I had clothing like that for the race. We had a crack, and he politely told me to stop being so negative about the race ahead. He assured me that I’d enjoy it after the first 3 minutes. As I was finishing my warm up, I saw Glyn Blakey and Finn Haworth who both told me how excited they were to be losing their fell racing virginity. Their excitement rubbed off on me and suddenly I was ready to flog myself up the fells.

The race started and I found a groove pretty quickly. For some reason the leading pack really weren’t that far ahead of me for most of the first climb. I tapped out the first climb, surprising myself that I’d managed to run every single step of it. My sister Evie was on top of Stile End to shout a few words of encouragement. I then hit the good line across the boggy section heading over to Outerside. I’ve never been very good at the ascending part of fell running. I am either too soft, or too heavy. Or maybe it’s both! I took a few small slips on the rocky sections climbing Outerside, which were mainly poor foot placement. I was constantly scanning around to see who I was near, trying to figure out who could and couldn’t be caught. I hit the first part of the descent off Outerside cautiously, struggling in the mud a little. Then let fly once I hit the rocky Stonycroft path. I nailed the sneaky grassy line and caught up with a few folk I thought would be uncatchable.

Climbing up Barrow I tucked in behind Sophie Likeman (of CFR) waiting for the opportune moment, to sneak past. James Appleton was taking photos at the top and shouted for me to “Catch Proctor!” So that’s what I tried to do. I bounded over a big rocky section to find Betts and Harrison’s parents. I thought I heard a lady’s scream, but that could have just been a noise I was making, as I felt like I was flying. I caught up with another CFR runner and was gaining on Lee Proctor. Opting for a line in the bracken was paying off, until I had loads of it wrapped round my feet. I tried to shake it off as I was bringing half of Barrow with me. The final part of the descent was so sodden it was a real effort to stay upright. Despite my best efforts I didn’t quite ‘catch proctor’! I crossed the line, legs torn up and splattered in mud in 20th place, in a time of 45:05. Setting a 2 minute 40 second pb. I would later find out I’d managed to clock the 6th fastest descent of the day, which pleased me immensely. Standing at the finish line cheering others in I told myself “You’d be dangerous if you could run up hill!” I turned round to see Matthew Atkinson covered in mud and splatters of blood. He’d managed 3rd place, but might have gotten second if he’d not had a spectacular fall on the last descent. Luckily, he didn’t have far to go for a bath! There had been new men’s and lady’s course records set by Ben Sharrock, 38:13, and Victoria Wilkinson, 43:49. Holly Wootten, of Keswick was 3rd lady in 48:32. Ambleside won the men’s team prize. Keswick won the lady’s team prize (Holly Wootten, Sara Hodgson and Shirley Murray). 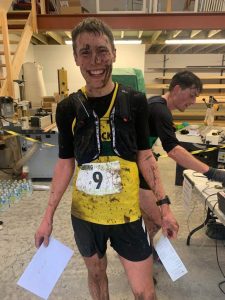 After great debate, Harrison opted not to wear his glasses. He ended up falling a couple of times on the last descent. He crossed the line in 107th place, with a big smile on his face. Lots of people were coming in looking like they’d been bog snorkeling. I saw Glyn cross the line with a bloody knee and told him it was a “war wound and a sign you’d had a good day!” 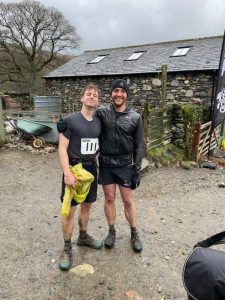 On my walk back to the car I saw Abdelnoor up and informed him he was right. I had in fact enjoyed the race. It was time to get back home and take Hector out for a run. My legs didn’t want to, but such is the life of a dog owner!

The next fell race is the Blake Fell Race. A fantastic race for all fell runners, new and old. Full of fast grassy climbs and descents. It’s also the first of our KAC club champs races for the year. For more details click here