This is Keswick AC’s Colin Valentine – as lovely a fella as you’d ever wish to meet. To those who know Colin, he’s fell running legend who stays under the radar in his present form as a runner who purely enjoys fell racing and orienteering, and the social side that goes with it, but who used to be a prolific winner of events, from short “dash” style races to the longer slogs, Old County Tops for example, even winning a road race in his time! 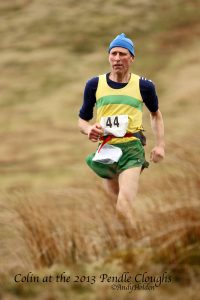 I asked Colin if he could provide me a list of his career wins, and this is it…

I’m sure that Colin’s list of other placings would be a good read too. One such is his Ben Nevis fastest race time of 1 hour 30 mins! I believe he’s run about 315 different races in his time – maybe not as impressive Darren Fishwick’s list of different races run, but even he will be dazzled by Colin’s performances over the last fifty years!
Like Colin, we’re all missing the races, but we’ll be back on the scene, hopefully before too long. Next time you see Colin at a race give him a friendly shout. He will probably have hit the V60 mark by the time racing starts again.