Six members of Keswick AC attended the 35th running of the Three Shires fell race on Saturday. At 12.4 miles, it is the shortest of the “Lakeland Classic” fell races, but with over 4000feet of climb packed into those miles, it’s certainly not an easy one!

Despite the forecast, the sun shone for the majority of the race, and over 170 people enjoyed the challenging course, taking in Wetherlam, Swirl How, Pike O’Blisco and Lingmoor summits before collapsing at the Three Shires pub, the race’s start and finish point, with a well-earned pasty and cup of tea. To celebrate the race’s 35th anniversary, all entrants were presented with commemorative mugs at the finish line.

Our thanks go to the marshals and organisers of Ambleside AC, and may the race continue for another 35 years!

A team of six Keswick runners took on the best road runners in the region on Saturday at the Northern 6 Stage Road Relay Championships. Starting and finishing at the Manchester Regional Arena, each runner completed a 6.5km loop in the shadows of the Etihad Stadium.

The team had a youthful look this year, with two 17 year olds getting their first taste of relay action, alongside some more “experienced” runners. 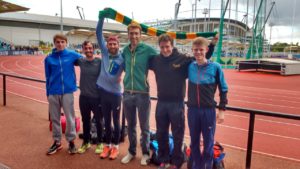 Leg 1 is traditionally the fastest leg and Sam Stead got the team off to a good start, completing the loop in 20:21 for 26th. Captain Steve Hebblethwaite then gained some places in an impressive 20:41 lap, despite recent injury. Bobby Hagan, becoming more and more important to the team, put in an excellent 22:44. It was then time for the ‘young guns’ with Harry Bolton (23:27) and U18 club fell champion Nathan Postill (24:09) showing there is a bright future for the club. Debutant Eddie Fletcher, more used to ultra marathons, anchored the team home in 24:09 for a creditable 45th team place overall. A top day out for all involved representing our club on the big stage. Full results: race-results

Meanwhile on Sunday, early cloud on the mountain tops cleared to leave terrific conditions for the final Keswick AC fell club championship race of the season. 61 runners lined up to tackle Dale Head, via a tough straight up and down route from Rosthwaite. The water level in the River Derwent had dropped enough to let athletes splash their way onto the fell, and Borrowdale’s Ted Ferguson took an early lead on the way up to the quarry. Supporters of all ages dotted the route, providing welcome encouragement to all runners on the gruelling climb. 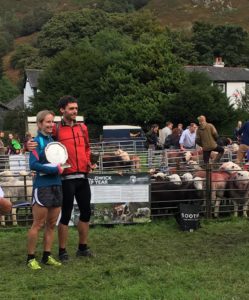 When it came to the descent, Keswick AC’s Carl Bell was in his element, and returned to the Rosthwaite show field first in a time of 46:38, but with Ted Ferguson a very close second. Meanwhile, Jo Gillyon was making it a double for Keswick AC by winning the women’s race in 71:05.

The prospect of club championship points ensured a big turnout from Keswick AC runners, who demonstrated the club’s strength in depth leading into the fell relay season: