On 5th September, postponed from 22nd August due to bad weather, 24 intrepid Keswick AC ladies, mostly veterans (over 40s) but not all, undertook a relay of Wainwrights 7 Summits.  This is a challenge starting and finishing in Ambleside linking together the highest summit in each of Wainwright’s seven Lakeland guides into a circular route, including some road sections, approximately 65 miles and 19,000 feet of ascent. 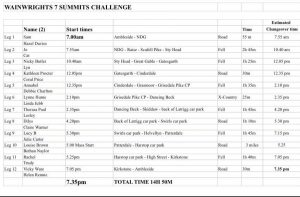 Sam Ayres and Hazel Davies got the team off to a flying start, leaving Ambleside at 7.00am and handing over some 57 minutes later to Jo Gillyon and Cat Brennan at the New Dungeon Ghyll.  Jo and Cat had by far the longest section taking in High Raise and Scafell Pike, which, map and compass in hand, they completed in horrid weather and slippery and boggy conditions underfoot.  Nicky Butler and Lyn Thompson then took over at Sty Head and had a good run over Gable, despite the horizontal hail, and down Warnscale to Gatesgarth where they handed over to Kathleen Procter and Carol Price, neither of whom had ever run in a relay and Coral had just joined the club the week before!  They had a road section to Cinderdale, with bike support provide by Mandy Glanville.  Annabel Holmes and Debbie Charlton then had a brilliant run over Grasmoor to Grisedale Pike car park, completing their leg in 1 hour 28 minutes. 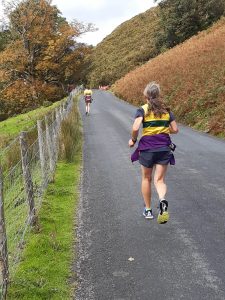 Leg 6 was the cross-country section. ‘Linda Jubb set the pace through the Braithwaite traffic jam, closely followed by Lynne Hume. Once through the village the heavens opened and it was mud and sogginess all the way through the willow trees, past Bog House and over the fields to Millbeck. Great fun despite being soaked through!’

In their own words, ‘Therasa Paul and Lesley Malarkey arrived early at the handover and waited in the car as the heavy rain crashed down and wondered how bad it was going to be on the summit of Skiddaw. Soon they were off and so busy pulling up a steep slope through bracken and heather that they didn’t give much thought to the weather. It was only as they topped out on Carlside that they noticed the freezing sideways rain on their bare summer legs, but they persevered, driven on by the thought of playing their part in this great adventure. They pushed on up the scree of Skiddaw, hands on knees, bent over against the hail until the welcome plateau appeared. As if in a dream they danced over the stones, playing with the wind and rain until the trig point loomed ahead. Then it was a glorious run downhill on grass, out of the weather and into the relative calm of the lee side. Running, jumping, stumbling down, down, down and so much warmer as they let the legs go along the flat sections, until the back of Latrigg car park where happy friendly faces awaited.’

The rain stopped just as Claire Warner and Dilys Riley began Leg 8.  This leg took the runners down Latrigg from the car park, across the newly completed bridge on the railway track and up along Shundraw and St. John’s in the Vale.  The runners were very grateful for the cycle outriders, Jo Gillyon and Annabel Holmes, who rode with them from Burns Farm all the way to their handover at Swirls car park on the A591.

Julie Carter, running Leg 9 with Lucy Burnett, commented: ‘Warming up at 5.30 pm on Swirls car park in the cold grey rain with Lucy – I wasn’t relishing the prospect of running (in my case wheezing) up Helvellyn and descending (in my case slithering ) down Swirral Edge. But time flies when you’re having fun, and we were up in 45 minutes and the thick clag was no problem – we couldn’t really get lost. It was my first run with Lucy who was fun, motivating and patient – and wow can she descend in a flash. It hardly seemed 10 minutes since we had left Swirls until we were pressing the stop button at Patterdale. Thanks to everyone- great team!’  They had a great run finishing in just over 1 hour 28 minutes.

Due to daylight hours, there was a ‘mass start’ of 2 runners at 5.00pm, Louise Brown and Bethan Naylor running the road section to Harstop car park in just over 21 minutes, where they handed over to Trudy Beetham and Rachel Mellor.  The conditions were not good, but they successfully summited High Street before meeting Vicky Ware and Helen Rennie at Kirkstone. 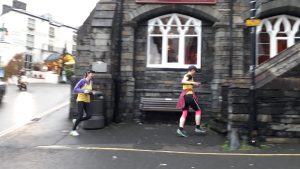 In their words, ‘For the final leg, after an overzealous early arrival Helen Rennie and Vicky Ware awaited the penultimate runners in pouring rain on top of Kirkstone Pass. The clouds miraculously parted as the baton was exchanged and they thundered down the Struggle in dry conditions into Ambleside.

Mounting the clock tower steps they were met with a small (socially distanced) group of Keswick AC ladies cheering them in to a successful completion of the relay’ in a time of 14 hours 47 minutes 58 seconds, and as far as we know the first time this challenge has been done in relay.