Training for the London Marathon

As a kid who grew up in a pre-jogging world where distance running was seen to be something that required at least an ability to sustain 6 minute pace over 5 miles I was never someone who considered themselves a runner. Instead, I spent much of my time up until leaving University in the Peak District, the Scottish Highlands and around Borrowdale walking, yomping and occasionally helping others navigate a route through the stickier sections of long distance paths, including both the Pennine Way and the Coast to Coast.

It was only in 2014 when a comment made by an ex-army PT instructor during an outdoor fitness class set me on my running journey.

After close on 55 years of excuses I no longer had anywhere to hide.

I started to set targets … 8 minute pace might be achievable at 1500m … but what about 5k, 5 miles, 10k? Having entered an off road 10k event and getting round in 58 minutes I bit the bullet, joining St Albans Striders in late 2014. I spent the following two years signing up for just about anything, and despite suffering the usual raft of injuries, by the time I turned up to run the Keswick Half Marathon in 2016 I’d managed to convince myself I could make a reasonable attempt at track between 400 and 5000m, had scraped a 6:52 mile, had discovered I “enjoyed” cross country and had demonstrated I could sustain 8 minute pace to just short of 10 miles. I’d also run four marathons – the best being 4:15:41 at Brighton in April that year.

Thinking about the challenge of Fell Running, and failing to realise that St Albans Striders and AC were registered for Fell as well as XC, Road and Track I contacted Sam Stead and asked if I could “second claim” for Keswick and was delighted when he said that all support was welcome. 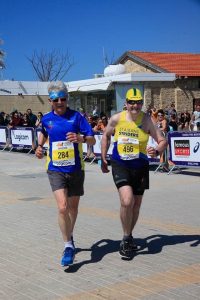 Despite being a “visitor” (until such time that I reach a point when I can switch allegiance properly) I’ve always felt very much welcome at Keswick events, and although last year was a wash-out it’s been good to have the excuse of events to come to Keswick more frequently.

That said it still surprised me that Lesley and Sam even agreed I could put my name forward for a London Marathon place. I was glad that I wasn’t selected for 2019, but when Trudy contacted me later that year and offered me a place for 2020 I was over the moon … kick starting my then training plan in January at the North Lakes Half. 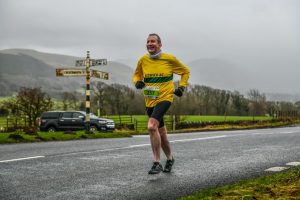 But that was then and once the 2020 event was postponed due to Covid, and lockdown led to me losing motivation for training, my long runs had largely dwindled to regular weekly Fly 5k’s with an occasional 5 mile. I started to get the mileage up at the beginning of the year but then picked up a plantar fasciitis sprain after an ill-judged 5k effort, so I’ve had to ease back for a couple of months to get that sorted. So it’s been bike and shorter runs, though I “did” the St Albans Half in 29 degree heat in June (completed rather than retired in 3:10), and was glad to get a reasonable steady 10k trail at the Vitality London – Hatfield House on Sunday.

So … in simple terms I have 9 weeks to get my act together and not shame the vest. The plan, such as it is, is to spend from now until the end of August building up base aerobic fitness and increasing weekly mileage. I have set myself a 100 mile target for August based on gradually increasing weekly mileage split across three to four runs a week but the training target is simply to feel comfortable over increasing distances at somewhere approaching 9.5 minute pace. 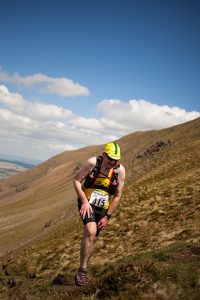 I’m resisting the temptation to book a pre-race Half Marathon … but I will add some fartlek training through September, and ideally get the long slow distance session up to 20 miles by two or three weeks before October 4th. I’ll then ease right off and maybe look to put some track sessions in to remind the legs how to move.

Overall though I’m endeavouring to be “sensible”. Injuries for a V60 take longer to sort than they did when I was a V55 … and it’s actually not about the time – it’s the taking part! 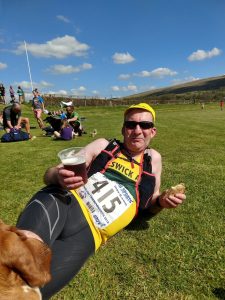