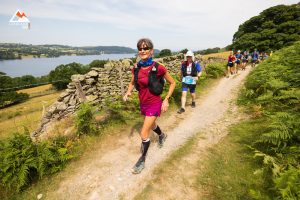 I arrived at Dalmain about an hour and a half before the start with stomach churning nerves. Two years ago I was due to start the Lakeland 50 but nerves had got the better of me and I didn’t sleep, panicked and didn’t start, so this year was even more important.

More and more coaches and cars were turning up and soon I was amongst the biggest crowd I’d seen this side of the pandemic. Lakeland 100 runners were dripping through the checkpoint at intervals, absolute legends, having been all through the night and still having the whole of my course yet to do.

I met up with Ella and we waited to start. It was blisteringly hot and we were heavily laden with all the required kit to be carried. A drone flew over, we all waved, the anticipation was electric. We were off and it started with a hot four-mile loop around the Dalmain estate before heading off across the fields to Pooley Bridge. Running across the new bridge I looked with envy at the people in the water, it was so so hot.

Soon we were running gently alongside beautiful Ullswater to the first checkpoint at Howtown. However I was shocked and dismayed to find a big queue snaking up the road. At this stage I was feeling quite queasy because of the heat, but a 15 minute wait and then a nice cup of tea made me feel better. I started walking with the tea and biscuits and the poles came out to propel myself up the notorious Fusedale. Wether hill was probably one of the few places I was able to run properly. As we travelled alongside Haweswater it was a narrow track and I was unable to overtake the line of people. Some heel pain and ankle pain had started to come on but I managed to get rid of it with paracetamol.

As I came into the second checkpoint at Mardale Head I once again felt a bit queasy and weary and managed to force down some crisps and another cup of tea, before striking off up the Gatescarth Pass towards Sadgill. I fell in with a 100 runner and had some good advice about eating more between checkpoints so forced down some hula hoops, but it was sadly at Sadgill that I noticed my right knee starting to seize up and become painful on the downhills despite the paracetamol I was regularly taking. Sadgill always reminds me of Sad Café and their song “Every day without you hurts”, well this was certainly starting to hurt!

I reached the Kentmere checkpoint and bumped into Ella again. I sat down and I have to admit I was in tears as I didn’t see how I could do another 23 miles in such pain as I knew from past experience that my Illiotibial band had done its usual trick! I was so out of it that I accidently threw my special Lakeland 50 spork away with my empty pasta bowl, so had to steal a teaspoon (I will take it back!) for my journey. Somehow I managed to convince myself to get to the next checkpoint at Ambleside.

On the way I fell in with some others and had some lovely encouraging conversations. One guy had twisted his ankle in the first four miles but was carrying on. Another said that pain was no reason to stop! So I continued. As I came into Ambleside it was about 10pm and dark. The atmosphere moved me almost to tears. Crowds lined the streets outside the pubs and they were cheering and clapping. It was amazing. Tim found me and led me into the checkpoint where I managed to ask a physio to tape my leg, but the tape kept peeling off due to sweat and suncream. I went inside and there were real toilets and I had the most wonderful cheese sandwiches and yet more tea. I also traded some paracetamol for some tape to strap up my blistered right foot.

I headed off into the night, walking, with a small gang of others. The route goes alongside Loughrigg to Skelwith Bridge and then out to Elterwater alongside the River Brathay. The light from my headtorch showed that the air was quite wet and foggy. Thank goodness for those poles. I was able to fly along at a very fast walking pace along this flat section, overtaking several groups of people. I could feel that blisters were now developing on both feet. Tim appeared at Elterwater and then told me he was going on to Coniston. I warned him I could be several hours and that he should doze in the car there After the campsite, the Chapel Stile checkpoint loomed like an oasis in the desert. Lights glowed alongside the path like a runway, “The Stairway to Heaven” announced a sign. Inside were angels and as I slumped into a seat they brought me yet more tea and bites to eat. It was a struggle to eat now because I’m not used to eating at this time of night and I was getting indigestion. Still 10 miles to go!

The march continued, the Langdales forming huge dark shapes before me. Pretty soon there was a magical trail of headtorches behind me, snaking along the Langdale valley. My little crowd pushed onwards past Blea Tarn to the unattended checkpoint on the Wrynose Pass, which was attended. There was somebody there but I was using all my energy just to keep moving so I’m not sure if it was the famous guy, Tony, who sits there every year!

The last checkpoint was Tilberthwaite and what a welcome site that was! There were chairs around a glowing fire and tea and biscuits were brought over to you. A handful of us were sitting there, the guy next to me had his head in his hands. It must have been about 4am and those lovely marshalls were still working hard helping people. As I got up to leave I felt faint so stood for a second before pushing myself up those notorious steps that take you up through numerous sheer drops from mine workings in the Yewdale Fells. At one point I nearly toppled off a craggy bit, but managed to right myself. Having recced this stage recently I seemed to be in the lead of my little group across here, pushing forward on those poles. It started getting lighter, firstly when the moon showed itself and then as dawn started to break. For me the hardest part was yet to come.

The descent down into Coniston was absolutely agony (in my knee) and I tried to go sideways but that didn’t work too well. Everyone streamed past me as I resembled an old man struggling with a zimmer frame on a steep rocky path. As I came into Coniston it was daylight and the crowds had thinned rather but there were still people standing on street corners pointing me in the right direction and clapping. It was around 5.30am by then. I tried a limping jogg as I felt I should, into the finish some 17 hours later. I had made it. I was and still am absolutely ecstatic about finishing. At Kentmere I thought it would be impossible.

I have a massive blister of around 10cm x 3cm wrapped around my left heel, several other blisters, a sharp pain in my heel during the race, another pain round the same ankle and the knee! Would I do it again? At the time I thought “no way” but now I am planning to get some help strengthening this body to try to stop the iliotibial band problem. The body is weak but the mind is strong! 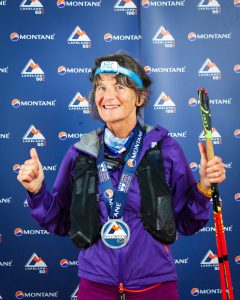