The Turner Landscape fell race starts at Turner Hall Farm in Seathwaite and is a 10.6 mile fell race in the Duddon valley with 3000ft of ascent.

This year’s race almost didn’t go ahead as the eight-year organiser, 78-year-old Mike Turner, was struggling to organise it due to Parkinson’s disease and e couldn’t find anyone else to take it on. However, his sons, Andy and Ian, stepped in at the last minute to save the day.

360 runners took part in the race, with farmer Anthony Hartley allowing the use of his land for free. The event raised £1,038 for Alzheimer’s Research UK from entry fees and a tea and cake stall.

Hannah Horsburgh and Carl Bell made it another Keswick AC double by winning the men and ladies English Championships Races. Carl finished in 1:24:12 and Hannah 1:37:04. 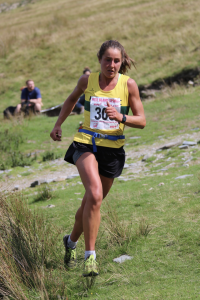