The Return of Round Latrigg

For all those who are interested….Elton John was absolutely fan-bloody-tastic! He played bangers all night long. I was in my element! It was one of the best shows I’ve seen. The lady sat next to me told me that she’d been to see him almost 50 years ago! Talk about longevity. We didn’t get back yam till 2am, then had to be at work for 9am. I very very nearly fell asleep at work. As much as I love my job, I was very glad to get through the day and get to bed.

Early in the week I spent a lot of my time at work promoting the upcoming Round Latrigg race. I told a wide variety of folk to come and give it a go. For some it would be their first ever race, for others they’d probably beat me! At 5.5 mile with only 750 feet of ascent, it’s really not my kind of race (how many times have I said that recently!) but it would be a good blast out.

Wednesday evening arrived in a flash! I’d put 4 pairs of shoes in the van. After I’d spent most of the day worrying which shoes to wear. It was actually dry enough for road shoes. Once I finished work and headed down to the park to register. I was buzzing to get some yellow and green safety pins to pin my number on to my vest. With it being a very fast race I thought I better do a proper warm up. So I did a few easy laps of the park and then some strides to really open everything up. There seemed to be a good lot of runners from Keswick turn up which was nice.

As I was warming up I saw my mam head into the park with young Hector Robert, “good look with that mam!” I thought. He’s a nightmare at races as he squeals and cries with excitement thinking he’s going running. They lasted about 5 minutes before mam was fed up with him and took him home.

The race started above the back of the pavilion. It was a steady start, myself and Andy Fidrmuc made an early charge to take the initial lead. As we hit the road Jonny Cox flew past me “I’m done now fids!” I shouted. I got a loud cheer from everyone at the turn off for Spoony Green. I tried to hit the climb quite hard, strava tells me it was the fastest I’ve been up the full Spoony climb.

As I was climbing up I’d been overtaken by Rory McDonald and James Beckingham, two patients of mine from work, both in their first fell race. “That’s the last time I treat your legs!” I shouted to them as they passed me.

At the car park I made the sensible decision to turn right, which would mean I’d only have to open one gate, instead of two. I pushed on and tried to catch James and Rory up. The ground was absolutely rock hard. I kept the pace up, but knew there was 2 miles of flat to come. Would I be able to keep this 5 min mile pace up on the flat? Definitely not! Could I catch James and Rory? Maybe. Would I blow up? Probably! Would anyone else catch me up? Also definitely!

As I turned off Brundholme Road I saw Racheal’s favourite fell runner, Mr Ambleside himself, Ben Abdelnoor. Oh and Mr Inov8, Lee Procter. Ben commented that for the second race in a week I was “First Keswick runner again!”. My response was something like “Might not be at the end old boy!” I knew that Graeme Sibson (Sarnie Grey) was coming in hot and I could feel the target on my back. Although he’s not really been running for that long, he is a better runner on the flat than I am. He’s got that weird speed people get when they first start running. Usually what would happen to me is my head would drop as soon as I get caught, and mentally I’d be beaten. But not tonight. I spent the first half a mile trying to fortitude my mind. I could see Rory and James ahead of me. I was visualising running next to them. I sorted my breathing out, relaxed my shoulders and hands. I was waiting to be caught by Sarnie, but when he did I had a plan. I kept any doubt that this plan would fail by going over Boris’s famous line of “Strong and sexy, strong sexy!”.

By the bobbin mill the inevitable had happened, he’d caught me. “Here he comes!” I shouted. I knew two things, one he’d been fixated on me for the last mile or so, and would have gone faster than he should to have caught me. The second thing I knew was that he wouldn’t be able to keep it up.

As we approached the tunnel I slowed a little to let him in front of me. As soon as he was two steps ahead I tucked myself in right behind him. So close I could smell his armpits! I realised I had gone too close when I accidentally caught his foot on my knee. Oops! I can’t actually trip the old bugger up I thought. So I gave him an extra yard. In the tunnel I’d planned to increase the length of my stride and lower my cadence. So I could hear how heavy his feet were hitting the ground and also how he was breathing. I felt like I was toying with my prey at this point. My legs felt fresher than his sounded to me. I knew I had to push on the downhill to open up a small gap. I upped the cadence and pulled away. The next mental checkpoint was the swimming pool. Every time a gap opened up I could feel the target on my back getting bigger and bigger.  During this I’d even managed to catch up with James just before the swimming pool. Even though I’d been staring at the back of his head, whilst he was fiddling with his cap for the last 10 minutes I’d forgotten about racing him too!

I moved the mental goal posts slightly, from Sarnie to James. I’d not catch Rory now. As we turned into the park I felt like I sling shotted around the turns. A group of yobs shouted an incredibly original line at me as I ran past “Run forrest, run!” I’ve never ever heard that one before! Doubting if they were even old enough to have seen the film I got up to max speed just before the line.

I crossed the line and could hardly breath! I was so hot and sweaty I looked like I’d been for a swim! I congratulated the lads on a great race. I finished in 35:35, in something like 8th place (Haven’t seen the results yet to give you the proper result!). I was over the moon to have been able to execute a proper race plan for once in my life. I was suitably shattered after that though! 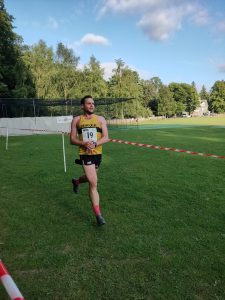 I cheered in all the other runners, including Boris and Rachael May. Then went for a sneaky pint with them both. It was a fantastic night and a great race. We’d also managed to raise £500 pounds on the night for cancer research (Plus United Utilities were giving £200, so £700 in total) which was brilliant!

A great fixture to have back in the calendar. Thanks Carl! I’ll hopefully have the website sorted with all the info by next year!