How do you measure success? Is it the size of your bank account or house? The type of car that you drive? How many times you laugh or smile in a day? How many friends you have? Or is it how much enjoyment you get out of your life?

As most people know, my heroes in life are my Grandparents, Peter and Uni Parkins. For many years they ran Longthwaite hostel (now Borrowdale YHA). In their time there they raised their 3 daughters and passed on their love of the outdoors to them. As a family we could publish a series of novels telling of all their adventures and stories from growing up in Borrowdale.

One thing I have always admired about my Nana and Grandad is that they have always, always made time for their family. To share in our adventures and sit and listen to our stories too.

My Grandad was a very good fell runner and in later life loved his cycling. My Nana is a former British Orienteering Champion. In my mind their stories will always trump mine. When I tell them of my adventures it always triggers some memory they have of that event. We’ll sit for ages talking about it and looking over route maps. I’ve started to tell people that I am in fact being coached for my orienteering as my Nana has a fantastic ability to look at a map and know where and how I went wrong, before I’ve even said a word. She’ll be 90 in July I might add!

To me, they are, and always will be the definition of success.

In the past I’ve been up the fells with them both. They were there to support me on my Bob Graham. I’ve done 80 mile bike rides with my Grandad, and I’ve been orienteering with my Nana. 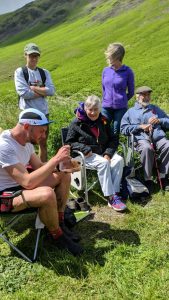 Which brings me nicely onto the Teenager!

This week’s orienteering event was up at Surprise View. Which I last did years ago with my Nana. I hurt my knee going over some rough ground and was comfortably beaten by her. This time round it was a contour only event. Where the map shows you the contour lines, and nothing else! A bit of a challenge, but all the controls had been put in easy places. I cruised round saving the legs for the race at the weekend. From the last control I thought I’d spank it to finish, it was maybe only about 60 yards or so. I got up to top speed, jumped over a tree root and handed heel first onto a very spiky rock. I felt it go right through my shoe and felt it stab into my heel bone. Ouch! It reduced me to a walk. I hobbled back to the car and hoped it would be fine. I’m starting to think that maybe those woods are a cursed place!

The next day at work I was extremely busy, and on my feet all day. I decided to wear the most cushioned shoes I own, and rubbed arnica cream onto it between patients.

I woke up on Saturday morning unsure if I should actually be running on it as it was still bloody painful.

“I’ll at least set off and see how it goes I thought” as I was tucking into my breakfast. I drove through to Stair ready for the race. As I stepped out of the van I stood onto a pebble which very nearly dropped me! I met Matko and we had a laal jog over to the start to run it off.

The starting location for the race is on the lower bank of Causey Pike. Which just so happens to be the steepest part. So the countdown should have gone “3….2….1…..Walk!”

During the first climb up Causey I spent most of it with Pete Rigby, who is actually Rachael May’s boss. We had a bit of a chat as we went. I really wasn’t up for this race at all. On the descent I felt another stone dig into my heel. “Why, oh why did I put these shoes on!?!” I thought. They were on their last legs for racing, but I do absolutely love the grip on them.

I took a much lower line across to Coledale Hause than everyone else. Matko and I went for a recce of it on Monday. I managed to claw back a bit of time on those in front of me. During the climb up to Grassmoor I started to settle into the race. Just as the wind picked up. I was right behind Corny (Paul Cornforth) when twice a gust of wind nearly blew him over. As I approached the plateau I saw Tom Simpson and Matko. “Hang on! I’m not actually that far behind them!” I thought. The group of folk I was trying to catch were just behind the leaders. “Time to reel a few folk in!” I said to myself. 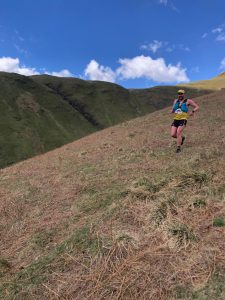 My mate Welsh Huw was marshalling on top of Whiteless Pike and told me that there was another Keswick vest just in front of me. I realised it was Craig Scott. Who at the start of the day said this was going to be his longest race yet! Blimey he’s going well I thought. Though I did remember seeing that he didn’t seem to have the best pair of shoes on for the steep descent down to the beck. I managed to over take 4 people on that descent, including Andy Fids. “Still can’t descend then ey Fids!?!” I joked as I passed him. “And you still can’t climb Tonk! I’ll see you in 10 minutes!” he shouted back. Sure enough he’d caught me on the climb going up High Snockrigg. 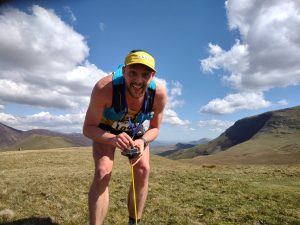 I tucked into some Haribo going up Robinson and stared at Craig’s arse trying to figure out if I was gaining on him or not. The wind was still pretty strong as we reached the summit. It’s at this point where we join those doing the Newlands Memorial (which is still called Anniversary Waltz in my mind). It was a good psychological boost to be over taking people all the way up Hindscarth. At the summit I was right behind Craig. I tried to stay just behind him hoping I’d get past and put some ground between us coming off Dale Head. I had a decent descent, as did Craig. Going up High Spy we were neck and neck. I wolfed down a few more sweets and tried to crack on. He seemed to put a lot of ground into be running over Maiden Moor. But again I managed to reel him in going up Catbells. At the summit I was about 30 seconds behind him. I readied myself for one hell of a last descent. I saw young Harry Bolton at the summit and off I went. I could see Craig and I knew I’d catch him down there. All of a sudden a chap doing the Anni Waltz took a very impressive tumble right in front of me. Do I stop to check he’s alright or use his head as a stepping stone?! I did stop and helped him up. He said he was just going to have a sit for a minute as he felt a bit sick. I reminded him that the marshall was just up at the summit if he needed major help, he said he’d be alright it was just cuts and bruises. He then said for me to carry on and that he’d just have a slow jog down in his own time. So I set off again on the descent. I felt like I was flying! I could still see Craig and was gaining on every part of the descent. The SiResults splits tell me that despite stopping I had actually clocked in the 2nd fastest time out of everyone doing the teenager from Cat Bells summit to the finish. Yet agonisingly it wasn’t enough to catch Craig, who beat me by 6 seconds! I finished in 12th position in 3:16:51. 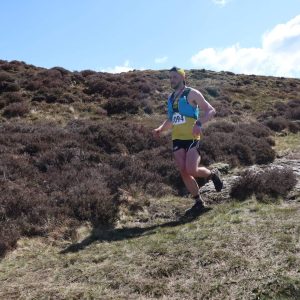 At the end I congratulated Craig on a fantastic race. I really do think he deserves the award for best race of the day! He said at the end he thought it would take him 4 hours. So he’s done unbelievably well. I pointed out if he’d been wearing a pair of fell running shoes he’d have done even better!

Amazingly Matty (2nd), Craig (11th) and I had won the team prize. The first time I’ve ever managed that!

I went over and found the guy who’d fallen and asked how he was. He thanked me for stopping and apologised for slowing me down. The truth of the matter is. Yes, if I’d not have been a good samaritan I’d have probably beaten Craig. But I have sadly also been in a race where someone has died. It was a horrible evening. I like to think that regardless of any fell runner’s current position in a race, they’d stop to check if another competitor is alright after a fall. The most important thing in fell running is that everyone makes it back home safely. It should never be any other way! I told the guy not to worry about it at all. and I was just glad he was safe. I also said to him that I was extremely happy with my run.

I went and got my free pie and pint and had a sit down with Martin MB and Jodie Gray. It was lovely and sunny so I hung around for the prize giving. It makes a nice change for me to actually win something! I selected a nice bottle of Red Wine as a prize. As soon as I brought it back to where I was sitting, Martin took it off me and said Red wine should be served at room temperature. He then decided to keep it warm on his crotch. I’m sure it was sunny enough that that, but thanks for that Mart! I headed back home and got ready to go out for tea at Mizu. 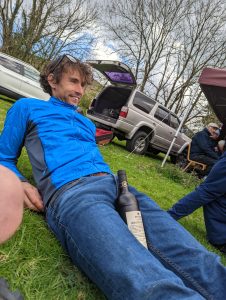 However it is you measure success, I am over the moon with the day! It still feels early in the year for a long hard race like that, so hopefully it’s going to be a good year for us all. Well done everyone!

A huge thanks to Les, CFR and all the marshalls for organising two fantastic races!

Full results for teenager are here