On Saturday 29th September a team of Keswick AC Lady Veterans took on the Abraham’s Tea Room Challenge.  This is a 30 mile route that takes in all the summits that can be seen from the café at George Fisher, a total of 12,000’ of ascent.  On the 3rd June Northern Fell Runners laid down the gauntlet and set a team record of 7hrs 39mins as a relay, splitting the route into 5 legs, and so a couple of Keswick AC ladies got together, a plan was made and a date set.

It was with great excitement a small crowd gathered at the door of George Fisher just before 8 am to see the runners off.  The leg 1 pairing of Annabel Holmes and Dilys Riley set off at a blistering pace through Keswick to Portinscale, over Cat Bells, arriving in Little Town well ahead of schedule in around 57 minutes.

A quick photo with the golden teacup (provided by George Fisher) saw the leg 2 runners, Lyn Thompson and Nicky Butler, off up Robinson and over to Gatesgarth via a rough descent and a quick road sprint.  The pair stormed into Gatesgarth well ahead of schedule surprising the leg 3 runners who were not expecting them for another 10 minutes at least!

Another swift and excited changeover saw Helen Winskill and Julie Carter disappear along the lakeshore of Buttermere, up the steep ascent of High Stile and across to Red Pike.  A brutal descent saw them arrive into the next changeover at Buttermere in 84 minutes well ahead of schedule.

A swift transition and Jo Gillyon and Trudy Beetham set off up the longest leg which takes in the tops of Whiteless Pike, Wandope, Hopegill Head, Hobcarton Crags, Grisedale Pike, Crag Hill, Sail, Scar Crags, Causey Pike and an unfortunate out and back to Rowling End!  Still well ahead of schedule runners and spectators cheered the pair off the direct descent into Stonycroft Gill to the final changeover, 2 hours and 16 minutes after they set off.

Leg 5 takes in Barrow and then returns to Keswick and it was Sam Ayers who ran this at lightning pace to arrive back at George Fisher so fast some of the team missed her coming in!  This made a final overall time of 6 hours 34mins, well inside the 7 hour aim and a new team record and ladies record to be challenged!

Thanks to George Fisher for the very welcome tea and cake afterwards and, of course, the golden teapot awarded at the finish! 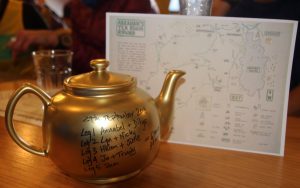