As momentum begins to build towards a more normal life. The good times have been rolling for Keswick AC!

On Saturday 315 of runners took to Blencathra to compete in the second English Championship race of the year. At 8 miles and 2700ft climb, it was significantly shorter than the last English Champs race, Ennerdale, just a few weeks ago.

The men’s race was won by Jacob Adkin, who seems to be winning everything he enters at the moment. Set a new record of 56:15. He held off very strong competition from Chris Richards, of Helm Hill, 2nd in 57:44. Billy Cartwright, winner of the previous champs race, came 3rd in 57:49. Joseph Dugdale, of Cumberland Fell Runners, 4th in 58:09. Dan Haworth, of Matlock AC, 5th in 58:29. 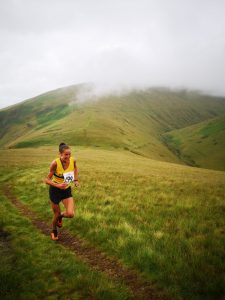 Arguably the most impressive result of the day belonged to the ladies winner, Hannah Horsburgh. Who hasn’t raced since winning the only British Championship race of 2020, in Wales. It should also be added that she only got an entry to the race on the Tuesday before. Hannah took over 10 minutes off the previous record time, winning in 59:56. Overall she finished in 9th place, and second Keswick runner. She is possibly the first lady to finish within the overall top 10 at an English Championship race.

Saturday also saw Brennan and Kat Townshend bravely venture south of the raise to attend the Salomon Serpent Trail Race 50km. Which is flatter and a different type of racing to what we’re used to in the Lake District. This makes it a very fast, but enjoyable, 50km race. Which goes through a mixture of bogs, wild foliage and roads. Brennan finished 2nd in 3:18 after a good battle in the early part of the race with Tom Adams, in 3:15:58. Both Tom and Brennan finished well under the previous record time. Kat raced well, battling amongst the top 5, despite rolling an ankle in the first few miles. She still managed an incredible 4th place in 4:46. 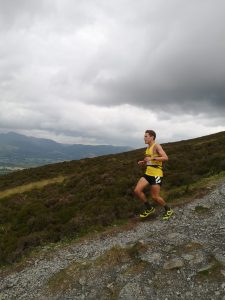 To finish the weekend off it was time for the classic Skiddaw fell race. The race was first put on by Des Oliver of Keswick in 19.. And still remains a very popular race. An out and back race. From Fitz Park to the summit of Skiddaw, and back. The climb is long and lung busting, the descent is fast and hard. The race is notorious for blisters. The men’s record for this race has stood since 1984, 1:02:18, and belongs to Kenny Stuart.

This was the first Keswick AC organised race since the covid pandemic started.  John Beetham did a marvellous job at organising the race, and keeping everyone safe.

There were some hardy folk who were doubling up for the weekend. You could tell this by the fact that their kit was still wet from Blencathra on Saturday. 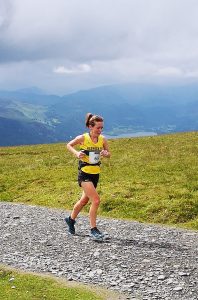 The ladies race was won by Keswick AC newcomer, Jodie Gray. She also led from the start and wasn’t to be beaten. She had a terrific climb and was first person to the summit. She made it down in 1:29:29. To claim her first ever victory!

Kat Downie, also on her second race of the weekend, ran very well to take 3rd place in 1:40:23. Julie Carter won the V50 category, in 1:52:10, and was also third Keswick Runner. Which meant Keswick had a clean sweep of team prizes.

A huge thank you to John Beetham, and all his marshalls and helpers for doing a brilliant job in organising the Skiddaw race.