‘I’m not a runner’ is my catchphrase. I might be a member of Keswick AC but I’m not really a runner. I’ve had a bash at 5 fell races this season but I’m not a fell runner. I just ran an ultramarathon but I’m not an ultra runner. My other half Jacob is a runner, a proper one (to me anyway…). He runs up hills, big ones, and I attempted to play a bit of rugby to get some exercise. I invited myself to the lakes 2 and a half years ago when I told Jacob I was quitting my job in the north east and moving across the Pennines. He said ok. It didn’t matter what he said, he had no choice in the matter but I thought it’d be nice to tell him of my plans. We moved into our house in July 2020 post covid nightmares and I tried to start a new life of adjustment to how insanely fit and active every bugger around me seems to be. Playing rugby you can be whatever size or shape you like and they can find a job for you. It’s what I liked about it, I didn’t feel like I needed to try that hard to enjoy it just how I was, a slightly unfit twenty something who needed a more active hobby than binge watching The US office on Netflix.

After covid and the move I tried my best to play again for a new team but something was missing, maybe I didn’t play for the exercise? I missed my old team a lot and despite my new team being a bunch of wonderful humans I admitted that I’d just fallen out of love with it. So it began. The quest for a new active hobby. I’d tried so hard to like running. I’d tried in the past to enjoy it. I’d done a parkrun once pre-covid, it sucked. I’d entered a 10km Santa dash and trained for it, it got cancelled on the morning due to frost. They rescheduled it a few weeks later and I sadly got dusted by many a fat man in a red suit. I walked the majority and hated mostly every second, I pushed for a sprint finish which my mam tried to record but sadly there’s no video evidence as she’s technologically inept and she forgot to press the red button, thank god! So I had tried to run. I joined Jacob for the occasional run around our local lump, the how. A steep climb and lots of slippy rocks and tree roots it’s a good test of endurance for someone like me. Jacob always twined if he hadn’t been for a run, it’s like he was going to collapse and die if he hadn’t clocked up X many miles that week or god forbid he hadn’t been outside that day. Why did he feel like that? I could never wait for it to be over from the second I set off to the second I stopped? I asked him ‘when did you start to enjoy it?’ His answer was vague, in fact I can’t remember what he said, maybe it was a rhetorical question.

In November 2020 we welcomed Hector Robert into our lives (he’s a dog if you didn’t already know, although I will speak about him as if he were my child because he is and no one can say otherwise). He was a ball of vicious puppy energy who tortured me for the first 8 months of his life. 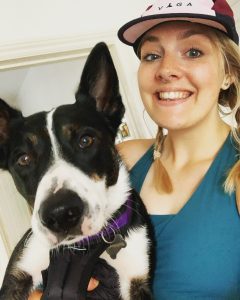 Fast forward to August 2021, I thought why walk the dog when you can run the dog? It’s quicker and Hec was twice as tired afterwards, with an overexcited border collie/kelpie what’s the downside? So we started to run together, and I don’t know how or when it happened but I started to enjoy it. I had a furry little friend to distract me and control. I taught him commands and we had lots of fun together. We entered a canicross 5km in October and we loved it, I cried at the finish because I was so proud of Hec. During races he is so focused and listens so well. We’d trained for the race at Whinlatter parkrun where I’d usually have to start 200m back from the finish because Hector would be squealing with anticipation. The race would start and we’d come hurtling down the hill together to join the rest of the group.

Jacob suggested I try a fell race next, I scoffed at him, a 5km parkrun is one thing, a fell race is a whole other kettle of fish. He convinced me to enter Sale fell race, it’s short and easy he said. I entered it but it was only after I had completed my 5th recce of the route I was confident I would know where I was going. Fell race done. What next? New years resolution time came around and I don’t write resolutions but I do write a list of yearly goals. I thought I wonder if I could ever run a marathon, that would be cool to say you’d done it right? Just once? But that isn’t me, I’m not a runner right? Am I? I decided I would try. I entered kielder marathon, it wasn’t until November, so I had plenty of time to train or change my mind perhaps. I tried my best to clock up the miles each week, but work constraints made it difficult to run consistently. I was struggling to stay motivated too. I needed someone to tell me what to do really, I had no idea how to train for a marathon. I decided I’d pay for some coaching, I needed to be told what to do and when and figured I’d be more motivated if I was doing it because I was paying for it too! I enlisted the help of Mags from Play in the Wild. She was nothing short of an angel. She pushed me hard and also supported me to relax a bit when I couldn’t manage to fit everything in sometimes. The training was well underway by February, I was starting to feel like running a marathon truly was an achieveable goal. Something I’d never have dreamed of even a year beforehand. I mentioned to Jacob in passing that maybe one day, next year, possibly in the future, definitely not now, but maybe one day I’d like to do an ultramarathon just to see if I could. Did you spot the many many maybes there? He said sure why don’t you ask our good friends Keswick AC’s very own Tom and Nicky Sutton of Freedom racing – I’m sure that they’d love it if you entered one of theit ultras! I said yep definitely I’ll speak to them about it for next year, maybe. March 1st 2022, my birthday. I received a surprise email. It’s from SI entries. It reads ‘Happy birthday RMK, time to do an ULTRAMARATHON  (to be said in your best American accent!) 50k of Beauty trails are coming your way!  Boom!’ along with the confirmation of my entry to the Salomon serpent trail 50km. ‘Jacob Tonkin!!! What the f*** have you done?!’ He laughed and said ‘you’ll be fine’. I was nervous but also excited. I quickly messaged Mags to see how we could adapt the training to suit, and asked if I could do it? How many people run an ultra BEFORE they’ve run a marathon? She put my mind at ease and assured me it’s more than you think, besides is just a really long eating contest! 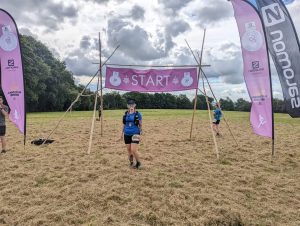 The next few months I went through the usual bumps in the road that come with training for a big event, none bigger or more damaging than my own self doubt. The eve of the ultra came far too quickly, I felt prepared and safe in the knowledge that I could walk it if all else failed. An extremely long journey to Hampshire and a night on a sleeping mat in the van probably weren’t the best set up for a long race but I didn’t mind, I felt the sense of adventure and tried to enjoy it. Morning came, I had a leisurely start as I was in the 10am wave of runners. It was a beautiful sunny day and I enjoyed some tea and toast before hopping on the coach to the start line. Jacob was already there helping out and made sure to tell me that I didn’t have much far to go after approximately 3 minutes after setting off. I loved the first 8 miles, I felt strong and fast. The hills were nothing compared to lakes hills, I wondered how long I’d feel this good! Not that long apparently. Ultras are a cruel mistress. Mile 15 came and it went west. Everything hurt, there were miles of sandy paths to run on which felt like I was trying to run through glue. I staggered on to mile 21 knowing that when I got there, there was only 10 miles left. It felt like a good milestone. I perked up. I stuffed a jam sandwich in my mouth and put in my earphones. This day called for nothing else but heavy metal. I am a goth after all. I wondered why I hadn’t done this sooner, I suddenly felt great. I overtook at least 15 runners in the last 10km as they had quite rightly settled down to a walk. I pushed on. It hurt regardless of walking or running so I thought I may as well run! The last 2 miles were hard, I tried to stay ahead of those I had overtaken but sensibly powerwalked some stretches of road towards the end. I longed to have a strong finish. The forest cleared and I could hear the cowbells. I pushed as fast as I could, it felt like a sprint, it probably was a fast walk at best. I dibbed in and crossed the line in 7hours 7mins. I didn’t have a goal time, I’d just wanted to finish. Jacob gave me a huge hug, which must have squeezed out every tear I had because I blubbed like a baby. Photo evidence included for your enjoyment. 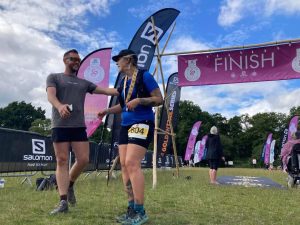 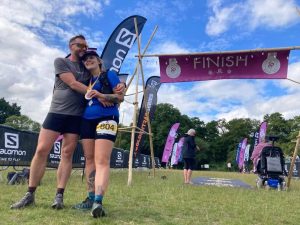 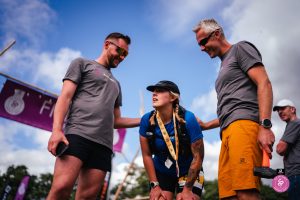 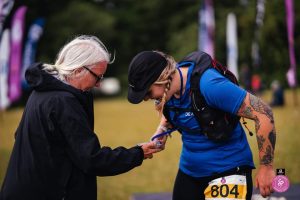 I sat down to feast on  some nachos, photo evidence also included  sadly, and soak up my achievement. A year ago I wasn’t running at all. Somehow in 10 months I’d gone from 0 miles a week to an ultramarathon. I’m not quite sure how it happened really. I’ve been resting since Saturday, and may have to make an earlier return to running than planned due to my apparent requirement to run 100m in the staff relay at sports day on Thursday. It’s probably going to be the slowest sprint on record. Don’t worry I’ll make sure they all know why. Looking ahead, I’ve thought about what to do next. The Windermere lap? The Lakeland 50? I don’t know why I’m looking because I’m not a runner. 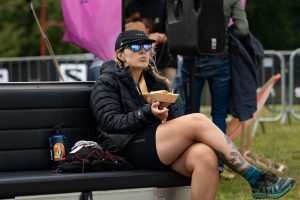