“Oh hello” shouts a familiar voice. It’s none other than Keswick’s favourite Slovakian, Boris Psodorov. A man who I call one of my best friends. Dressed in his beautiful tight shorts, which leaves very little to the imagination. This doesn’t matter to me though, I’ve seen it all before. On numerous occasions!

This gets me thinking. Running friendships really are rather bizarre! You agree to go for a run with someone. If you like them you’ll go again, and again, and again, and again, and again. You go out in all sorts of weather and at any time of the day. You can end up in new places you’ve never seen before. You can discuss literally anything. Without being aware of it they become your best friends. When you’re not running with them you send them messages basically saying “When can I see you again!?” Suddenly your actual partner is beginning to get jealous and questions the intimate nature of your relationship with your new running friend.

Ok, maybe this isn’t everyone. But as everyone knows this has certainly been the case with Craig Marsh and I for a number of years now. During the first lockdown it also became the case with Boris. We started off running together. Then we’d sneakily drink a few beers in the car park outside Ivan’s. Then before I knew it I was seeing him every day. Before I knew it he’d become one of my closest and most trusted friends. Later that year when my dog George died he was one of the first people who I cried with. He’s been a big part of every major running adventure I’ve had to date. Just before my Bob Graham he tested positive for the ‘rona. Which meant he couldn’t get out to run. On one of our calls he told me “Don’t worry, I’ll be fit. I’ve been doing 300 squats a day!” When the day came he’d been struck down by gout. All those lock down glasses of red wine and meat sandwiches had caught up with his big toe. Instead of running he rode his bike with us to the foot of Robinson with us. At the end he’d slipped away from work for 5 minutes, donned his Keswick vest, gave me a hug and presented me with a pint at the doors of the moot hall. He’s someone I know I can call anytime of day to ask for a favour and he’ll come running to help. I better stop saying nice things about him for now, as he’ll be starting to feel uncomfortable. I can even hear Craig calling me soft! 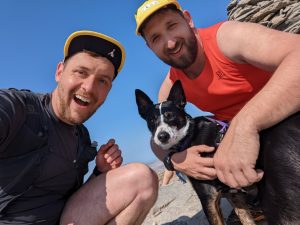 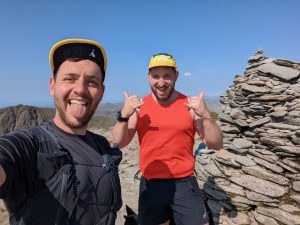 Tonight I’ve agreed to pace Boris round the infamous Round the Houses race. A race Boris has formed a bit of an obsession with. My legs are still a bit sore from my race at the weekend, so I’m hoping pacing Boris will do them some good.

On my walk back up town from work I pop my head into The Round to see how the main man is feeling. He seems up for it, and asks what I’ll be wearing. “Errmmm Kes vest and black shorts” I reply. “What colour socks do you have?” Boris asks. “I will be wearing the pink stance socks. Do you have them?” he continues. “Not with me” I sigh, knowing that he’ll want me to drive back home to get them so we are matchy matchy. “You should wear them” he orders, before telling me his master plan for the evening. “Ok so, shall we do a Craig Marsh?” By this he means set off at the front at close to full speed and see how long he can hold it. “Steven Wilson will be there and I want a photo leading the race” I inform him that it’ll probably cause the wheels to fall off if he wants to do that. But as my mam would say “leave them whilst they’re happy”. I leave Boris to go call Rachael May to ask her to fetch my pink socks. Am I bugger driving back yam for a pair of socks now.

I headed down the park to hand out numbers at registration. 174 pre entries and about 20 enter on the night. Which I think is a fantastic turn out for a Wednesday night race.

This year the start had been moved from the Moot Hall to outside the Fiat garage, Boris would have further to sprint now! We positioned ourselves right at the very front. Shoulder to shoulder with the big dogs. Current Mayor Alan Dunn set us off. GO! 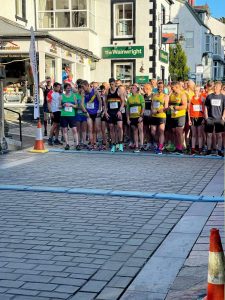 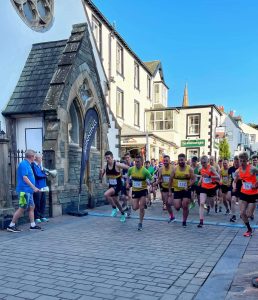 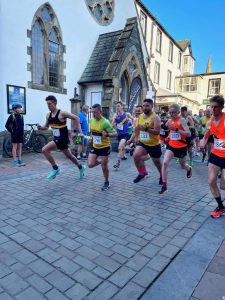 Off he set sprinting, I was tucked in behind him to give him his glory. The roar from all his adjourning fans at The Round was something to behold. By the time we reached the bottom end of town we’d slipped down till about 7th and 8th. Heading up to the Borrowdale roundabout he admitted he’d gone far too quick at the start. “Totally worth it though mate” I told him, and reminded him we’d catch folk on the descents.

Boris always tells me that one day I will be mayor of Keswick. I do always like the sound of that. However, during the race it became apparent that it should actually be him and not me. I have never heard so many spectators cheer on one man. At every turn someone else was there cheering him on “Go on Boris lad!”.

I once heard Boris tell someone that in this country he will always be seen as a foreigner, which upset me. Being Slovakian is something he is very proud of, and it’s a bit part of his identity. However in the 10 years he’s lived in Cumbria, he has well and truly become a true Keswickian. He’s embraced our way of life better than a lot of folk who were actually born here. In these 10 years he’s taken up running, cycling and walking. He’s competed in tough fell races, trail races, ultra marathons and road races. I fail to think of anything he’s failed to do once he’s put his mind to it.

Over the last 2 years he has cemented his local legend status by having the idea to bring anyone finishing a Bob Graham or other big round a pint of beer from The Round. He literally knows everyone, and everyone who’s had a pint from Boris at the end of their round remembers it. “That’s Boris who gave me a pint when I’d finished my Bob” says a random man to his wife as we pass.

The crowds continue to roar for our Boris. As we head into Main Street I remind him to look strong and sexy. The atmosphere was electric as we looped around the middle of town. I can see Boris is starting to really enjoy himself. Which brings a tear to my eye. He pushes on up past Greggs and to the cinema. 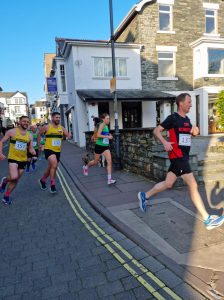 As we climb up Manor Brow he’s looking at danger of blowing up. So I tell him to power walk to one lamp post then jog to the next and repeat till we reach the top. Once we reach Craig Smith who’s marshalling (who jokingly tells us to turn right!) I tell Boris to “show us all the Slovakian hammer and batter this descent!”. We had a good descent and kept the pace up along Penrith road. On the final push up to County Corner we found Marshy who had come back to run in with us.

“Empty the tank son!” I shout. “IT IS EMPTY! IT IS EMPTY!” He screams back. We turn on the corner at Greggs and suddenly he’s flying down mainstreet almost reaching terminal velocity. With Craig and myself at his side he crosses the line 96th in 36:14. He’s happy with that! We have a hug, Craig and I congratulate Boris. Craig managed 16th, despite only just coming back from a boozy weekend in Blackpool. “Pub!” Boris splutters. We all agree and walk up. 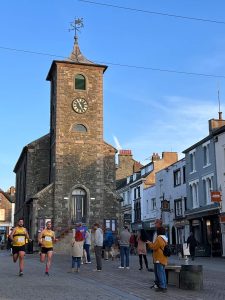 It took Boris a while to reach the pub as he had to stop and pose for photos, sign his autograph, hold babies and give his blessing to all his fans.

We drank a few beers and laughed the night away. A top quality evening, with my favourite people.