We’d like to share the sad news that a former Keswick member and volunteer has passed away.

RIP Dennis, he lost his fight with life late on the 5th April.

Well known Keswickian, sportsman, mentor and friend to many. He will be making his final journey on Thursday 15th April and for anyone wishing to say goodbye the details are below. The funeral service will take place at St Johns Church Keswick, on Thursday 15 April at 1.00pm, followed by a private family cremation.
Family flowers only.  Donations, if desired; made payable to Keswick Football, Cricket or Athletics clubs c/o F and W Greens Funeral Directors Ltd, 19 Eskin Street Keswick CA12 4DQ. The funeral procession will be leaving from Grizedale Close at approximately 12.40pm on to Skiddaw Street, along Blencathra Street, down Southey Street and on to Church Street.

Chris Knox said this about Dennis…

Dennis Hayes came to running via retirement from the army, Keswick Cricket Team, Keswick Football team – player then manager. The running boom of the 80s saw him enter Keswick half marathon along with a thousand others. He won prizes at V50, V55, V60, V65 and V70. He would still get under 80 minutes for the half as V55. He ran for England in veterans cross country again gaining the odd medal. He was there every week when the junior section was restarted by Steve Fletcher, always happy to help out.

So sad to hear of Dennis’ passing.  He was a terrific runner and very well respected nationally in his age group. Trish and I did the Tour de Mont Blanc with Dennis & Margaret back in 2009. They celebrated their Golden wedding Anniversary at the summit of the Aiguille du Midi (12,602ft), en route, and I took a lovely picture of them both there, with Mont Blanc in the background, as attached. He was a good friend and a lovely kind man. 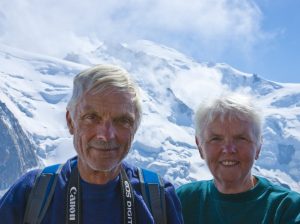 If you’d like to add your own memories, just email our Webmaster to get them added to this news story.