After the dust has settled and I have a bit of time waiting to catch my train back to Cumbria, I thought I’d sit down and distil yesterday’s events.

The following are random thoughts and all as important as each other, so don’t attach any importance to the order in which they appear.

I went for a little leg loosening run to flush my body through. I showered and put on my kit and had some muesli and coffee for breakfast. 7.30 came around earlier than I expected, so I left. There were a trickle of Marathon runners walking to the station and we all wished each other good luck.

I chatted to many more on the tube journey to London Bridge station. Everyone was in a relaxed and expectant mood. Travel on London Transport was free for runners, so that was a nice added bonus.

As with the day before at Mile End parkrun, I bumped into a Cumbrian at London Bridge. Mark Drummond (who runs for DH runners in Carlisle and who I ran the DH 10k with in 2017) was there and we travelled to Blackheath together.

As we made our way to the start, I found fellow Keswick AC runners: Ella Runs, Nicola and Siobhan on a windy and blustery heath. Ella and I had planned to run together as we seemed to be well matched in other races we have run together.

Sitting almost next to the Keswick runners was Clare Fowler, parkrun’s safeguarding officer. So I had a little chat to her and wished her good luck with her run.

Ella was in mother mode giving me a boiled egg, and, most crucially, a spare bin bag to wear when we had loaded our kit onto the baggage truck. She also gave her bin bag to a girl who didn’t have one and wore a top which she disgarded early in the run.

One of many random acts of kindness I saw during the day. Anotherone which sticks in the mind was a woman who saw another woman struggling and gave her a jelly baby. That typified the ethos of the day for me.

And so to my run. As mentioned earlier, Ella and I planned to run together, and we set off well. Pretty much sticking to our planned pace of 9 minute miles. We were quite comfortable for the first half, although I nearly choked when trying to eat one of my coffee chocolate capsules. But the main thing was that they had the desired effect. We had a couple of toilet stops and we saw Rachel Kearns and Dave Kearns at Cutty Sark. Then at 12 miles, I think, our good friend, Miriam Hunt screamed at me from the crowd, and grabbed my hand. That was a great fillip, as I was starting to flag. All through the first half the crowd were amazing. The noise was like a wall of sound at times. I can’t praise the crowd highly enough. They were absolutely incredible and nothing I’ve ever experienced in my life.

Just after the halfway point, Ella admitted she was struggling and that she wouldn’t mind if I left her. Little did she know I was feeling the same way. But it wasn’t until mile 15 that the wheels fell of my race. Or so it felt at the time. I was slowing down and Ella was a distant dot on the horizon. I thought that I couldn’t continue and looked out for the nearest tube station. This was at Canary Wharf. And then I thought about all the sponsors and Keswick AC Members, who had awarded me my place and all the people I felt I would be letting down if I quit now. And quite inexplicably, I burst into tears. I must have looked a right sight. So much so that some St John’s Ambulance volunteers asked if I was ok. I managed to pull myself together and walked a bit and thought, “I’m going to enjoy this” and that got me through my little crisis point. That and the crowd. Who kept shouting my name. My legs felt like blocks of wood. I saw Rachel and Dave again and gave Rach a massive hug. And then ran much of the course back to the finish, though did walk a fair bit. As I got over my little tantrum, I started working the crowd, dancing to the music and enjoying my day.

Just after the 40km marker I heard someone call out “Mr Wiseman” and I turned to see Ravi Lobo and Ian Fullen. That was a great incentive to push for the end. I did walk a bit down Birdcage Walk, but ran the last 800m.

Crossing the finish line was a massive relief. I finished in 4:47:38, some 47 minutes from my desired time, but my second best marathon time anyway. I picked up my medal, goodie bag and kit bag from the truck. But the finish area was cordoned off from the rest of St James’s Park and I was desperate to lie down on the grass.So i walked around the fencing and lay down for about five minutes and found it very hard to get up.

I then made my way to Waterloo to a pub where Clare Fowler had booked some tables, I chatted briefly to her and then went onto the Southwark Brewing Company, Peter Jackson, long time Sunderland supporter was holding a reception for marathon runners. As I was walking to these places, so many people saw my medal hanging proudly from my neck and saying ‘well done’. There was a band playing when I got to the pub and the lead singer was wearing her finisher’s t-shirt and medal. I was impressed with that. When the band finished, it was karaoke time and I said yes to doing the first number.

“Going Underground” by the Jam.

So a crazy day ended in a crazy way.

I’ve never experienced so much good will and can see why the London Marathon is such a loved event.

My advice to anyone thinking about doing it? Do it. It’s worth all the pain. It’s bloody hard and you’ll find yourself in a hole, like I did. But you’ll find out so much about yourself. Thanks also to Ella who was a pleasure to run with. It was just a great coming together of the running community.

I was raising money for Duncan Booth‘s Annual 5in5 and 10in10 Challenge fund. The response to that has also been humbling, with £546 being donated so far. Thanks to those who donated.

I’ve just entered the ballot for next year’s event. Wish me luck.

The link to my fund-raising page is here:
www.justgiving.com/fundraising/nic-wiseman2Nic’s London Marathon 2019 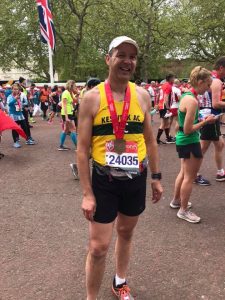