This one may seem a little odd, but please bear with me!

Colonoscopies are very odd things. The first time I had a serious discussion with a doctor about needing one, all I could reply was “YOU’RE DOING WHAT TO ME!”.

I’ll give you a brief run down of the build up to the procedure…..

Step 1: Starve yourself for 24 hours beforehand. Not easy for me! As I am the world’s hangriest person!

Step 2: Drink 1 litre of laxatives 12 hours before the procedure.

Step 4: Find a toilet rather quickly.

Step 5: Lose feeling in legs and feet due to sitting on a toilet for so long.

Step 6: Drink a second litre of laxatives 6 hours before the procedure.

Step 8: Lose feeling in legs and feet due to sitting on a toilet for so long.

Step 9: Arrive at hospital a starving wreck who is unsure whether to laugh or cry

On a serious note, I have had to endure a few colonoscopies in the last 5 years. Going through these procedures honestly saved my life. As daunting as it may seem there are a lot of things they can do to make it as pleasant as can be. Though it’s probably not a good starting point when you get your words mixed up and look the doctor in the eye and say “I think I’d like to try your seduction please Doctor”. He laughed, put a hand on my bottom and said “I think you mean sedation Mr Tonkin”.

After a lot of frustrating hospital trips, I decided to change hospitals. I followed some advice from someone in town and made my way over to Newcastle RVI.

If I hadn’t chosen to do this I’d not have met Rachael May.

Rachael May was a rugby player when we first met. She had zero intention of becoming a runner, let alone entering fell races. I tried to get her to come for a run with me, but she always felt running was just for rugby fitness and not enjoyable at all. She’d occasionally come with me, asking the questions we all asked when we started our running journeys, like “When does it get easy?” The answer of course is, it never does! 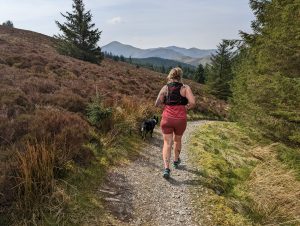 It took her to invite herself over to live in the Lake District and then Hector Robert, our energetic Collie Kelpie Cross, turning one year old to really motivate Rachael’s running. The two of them would run from our house over the Thirlmere dam to the triangle car park and back. Which is about 2.5 miles. Occasionally I was allowed to join. Once they’d mastered that they started to go further and further. Before I knew it she actually wanted to join KAC and do a fell race. I suggested the Sail fell race. She agreed as long as we could have several recces. We ran the route once, sometimes twice a week leading up to the race. “I think you’re ready for it Rachael May. You’ll soon be personally responsible for path erosion if we do it again” I’d say after every recce. “I just need to do it one more time” she’d always reply. 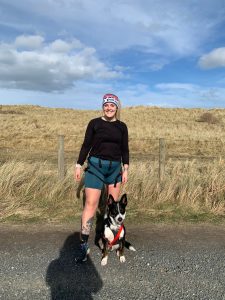 The day of the race arrived and she was still worried she’d forget the way to go. Her parents and Grandma had driven all the way across from Sunderland to cheer her on. The weather was sunny but bitterly cold, which bit into your face and lungs. I managed to come home 6th, which is still my best finish in a fell race. I’d promised Rachael May that once I crossed the line I’d turn round and go find her to run in with her. I couldn’t get over how strong she looked when I did find her. She charged down the final descent and crossed the line to a very loud reception from her family, KAC club mates and friends. Most importantly she’d had a great time and wanted to do another. 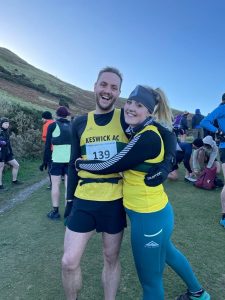 Since then she’s completed the Blake Fell race, Loopy Latrigg and Buttermere 20k. In the coming months she’ll be racing the Ullswater Way (20miles), the Serpent Trail 50k, the Great North Run and Keilder Marathon.

Though tonight is a new experience for her. It’s her first mid week race and Lords Seat!

We’d done our usual recce of the route the weekend before. It seemed only fair that I offer to run the race with her, as the week before I’d ran Round The Houses with my other girlfriend, Boris. Rachael May says she’s gone into “ultra mode” at the moment, which I mistook for football hooliganism. To gently persuade her to participate in the race I told her of the importance of speed and strength work when training. Though the offer of going out for tea after is what really swung it.

Craig and Boris met us at my parents house to drive up together, and we picked up international rugby sensation Evie Tonkin en route. I could tell she was a little nervous but reassured her that enjoyment is the most important thing about tonight, and it would be over pretty quickly!

124 entrants in the race gathered in the car park, waiting for Carl to set us off. GO! Up the forest trails we charged. I was very proud of how well Rachael May did on the climbs. Only a few months ago we’d done the Whinlatter Park Run together and she was moaning to me at every climb. Tonight though she looked strong and pretty comfortable.

We gained on a few people dropping down to the stile at the bottom of Barf. Then grinded out the climb hands on knees all the way. I pointed out how lovely an evening it was, all I received back was a grunt. It was sunny yet a bit of a breeze to prevent you from overheating. 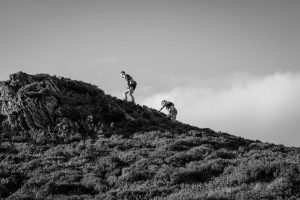 Descending isn’t (yet) Rachael May’s favourite part of fell running. I often forget that growing up here gives me an advantage, as I’ve spent thousands of hours moving over rough terrain. It’s probably the hardest thing to learn and train. Though for someone who’s only lived in the Lake District for 2 years she does pretty well.

As we climbed up to the summit of Lords Seat we were catching another lady quite quickly. At the top we realised that the race was on! 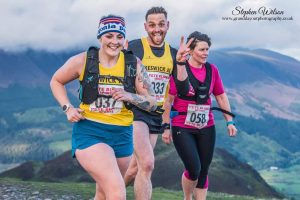 Rachael May attacked the first descent hard, thus stating her intentions to the lady. We jumped over the stile and kept the pace up. I could hear she was starting to tire quickly “Keep garn lass! As Boris would say, “It’s hammer time!” I shouted. As we turned onto the undulating path the other lady was gaining on us. On the last tiny bit of climb she snuck past us. I could see Rachael May’s head drop a little. Luckily as we started the descent Craig had run up to find us. His motivational line of “Send it lass!” worked and she started to batter the descent. As we approached the final descent we were cheered on by Ivan, Holly, Lorella, Jenn and Elsie Bell. I think it took us both a bit of willpower to not cheat and go down the slide at the end! 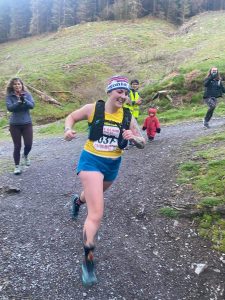 She crossed the line in 1:02:07 to a very big cheer. A grand run out on her 4th fell race. I’m still amazed and very proud that the rugby player who hated running has become a fell runner.

As promised we went out for a dirty Wetherspoons dinner to celebrate. Then drove home as quickly as we could to tell Hector all about the race. Yes we really are that sad!

So the moral of the story is folks…. Don’t be scared of colonoscopies! They can cause life changing events for yourself and others.

Big thanks to Carl and Jenn for organising the race, and to all the marshals!

The last two weeks of running races with my best mate and girlfriend have been amazing experiences. I’ve been able to see different aspects of races that I’d not normally see. The support for each and every runner has blown me away. I can honestly say that those in the latter half receive more encouragement and louder cheers than those at the front. Those who have won the race are the first people to come cheer others on.

If you’ve never done a fell race before and have always wanted to do so. Then I would strongly suggest you pop down to Fitz Park on Wednesday 18th May to watch the Latrigg Fell Race at 7pm. Come see and feel the atmosphere for yourself. It might just inspire you to enter one in the future. We have a couple of fantastic races coming up which are perfect for first time fell racers. Round Latrigg 22nd June and (Not) Round Latrigg 17th August. Plenty of time to get a few recces in!