In the second of our ‘London Marathon Spotlight’ series, we speak to Diane Shaw, who was awarded one of our club places for the Virgin Money London Marathon and is attempting the distance for the first time.

How long have you been running, how and why did it all begin?

I started running about 10 years ago. It was initially to keep weight off, but before long it was just about enjoyment! Keswick local Chris Knox had noticed I’d started running and asked how it was going. When I said I had to keep stopping, he told me just to slow my pace right down. I was clueless! He said that over time, I would just naturally get faster. Who’d have thought that a simple piece of advice would make such a difference? After 4 months of running, I joined Keswick AC. One of the best choices I’ve ever made.

What made you want to attempt the marathon distance? Have you done one before?

I’ve wanted to do the London Marathon ever since being a spectator once a number of years ago. I’ve always enjoyed half marathons, so it would be good to challenge myself further. It’s such an iconic race, and to be part of that will stay with me forever. I haven’t raced that distance before, but when we lived in Keswick, I’ve done up to 20miles on the road and on the fells. Since moving to Wetheral, I haven’t done that kind of distance. I’m so grateful to Keswick AC for giving me this opportunity. I know there are runners in the club who would achieve a much more impressive finish time than me. I will be wearing my vest with pride.

I’ve signed up with Dave Troman at Love to Run Coaching to help me with a training plan. I decided to do this as I’ve lost my confidence in my ability. Knowing Big Brother (Dave) is looking at my training data certainly gives me the motivation to get out there! Dave gives me blocks of training which fit around my work commitments. We have also had to factor in me being ill for basically all of January. I continued running for the first 3 weeks of the month, but then my doctor said I had to rest for a week. It’s done me good. I’m doing a mix of speed efforts (at a throwing up type of pace

?), easy runs and steady long runs. I like the variety and doing the speed work and I’ve already noticed an improvement in my overall average pace which is really pleasing. I do 4 run sessions & 3 core stability sessions each week. 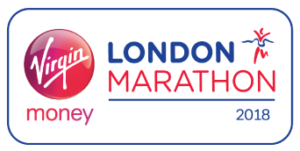 I would love to do the race in 4 and a half hours, but at this stage, I don’t know if I will achieve that. I’ve had panic moments, feeling that I’m running out of time with my training and everyone else seems way ahead of me, but that’s just self-doubt creeping in. When I’ve had a good session, I’m so chuffed with myself and how I’m progressing.