The Hodgson Brothers Mountain Relay was originally established in memory of Ian Hodgson, who was tragically killed in a cycling accident the day after he had won a mountain marathon in Patterdale. It was renamed in 2015 in honour of Ian’s brother Michael who was instrumental in establishing the event as a four-legged paired relay and promoting it to what has now become the premier event in the fell running calendar. The undisputed kings of the event are Borrowdale Fellrunners who won a record 19 times in a row before their defeat last year at the hands of Dark Peak. Despite this, Keswick had been close challengers for the past couple of years. buoyed by their recent British and English Championship victories they lived up to their status as pre-race favourites to take home a famous victory.

Unfortunately, an inclement weather forecast forced the traditional route to be shortened to an out-and-back race from Patterdale to Kirkstone pass and back. A wise decision by the organisers, who executed a challenging event to perfection. Leg 1 was the only unchanged leg; from Patterdale to Hartsop via Angle Tarn. 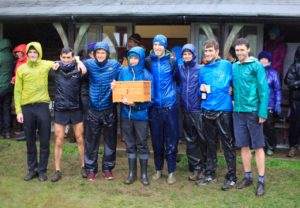 The Keswick men’s pairing of 10-time Hodgson runner Chris Edis and debutant Dan Haworth got the team off to a solid start, finishing the leg in 7th place, albeit two and a half minutes behind early leaders Calder Valley and Borrowdale. The Leg 2 pairing of James Appleton and Mark Lamb had a lot of work to do, and bolted off towards Threshthwaite Mouth in pursuit of the leaders. By the time they had reached the next changeover at Kirkstone Pass they had a lead of nearly a minute, a stunning performance that turned the race on its head. The next two legs were the reverse of the first two, and the third leg pairing of Carl Bell and Steve Hebblethwaite showed their descending ability, further extending Keswick’s lead with the fastest leg three time of the day. By the time they had reached Hartsop and handed over to Sam Stead and John Battrick, a clear lead of over 3 minutes had developed over Dark Peak and Calder Valley. All that remained was for Sam and John to stay on two feet and finish the job, although they managed to also gain the fastest Leg 4 time of the day and receive a rapturous reception at a very damp Patterdale. They took home the trophy, a replica of Ian Hodgson’s Walsh running shoe. Last year’s victors Dark Peak were second, followed closely by Calder Valley. Club spokesperson Sam Stead said: ‘This is our favourite event and one we have been targeting for a very long time. It really was a great team effort. Many thanks to the organisers for persevering in the weather, and pulling off another fantastic race’. Full results: http://hbmr.org.uk/results/

In the Veterans race for over 40s Keswick fielded their strongest male team for many years with serious competition for selection ahead of the event. Rupert Bonington and Dave Prosser started strongly on Leg 1 over Angle Tarn Pikes to Hartsop finishing in 18th place overall but 5th Vets team behind Ambleside, Helm Hill, Dark Peak and Clayton-Le-Moors. A tough Leg 2 from Hartsop to Kirkstone saw Steve Angus and Pete George slip a little to 20th overall but in the Vets standings they climbed to 4th ahead of Clayton. As the weather turned very poor Phil Winskill and Dave Birch took over on the key Leg 3 back to Hartsop and navigated well across Caudale Moor before a steep technical descent where they passed Dark Peak to elevate Keswick to 17th overall and 3rd Vets team by the end of the leg. Andrew

Slattery and Craig Smith protected the team’s position on the last leg with its steep climb and long, fast descent to Patterdale. Despite closing on local rivals Ellenborough AC they were unable to improve on 17th overall and 3rd Vets team but this was the best result for the Vets in recent years and all were justifiably proud of a podium finish. Ambleside Vets took the win in 2hrs 58mins after an impressive run which saw them ahead of their Open team for parts of the race. Helm Hill took second in 3hrs 3mins with Keswick 3rd in 3hrs 8mins.

The ladies race was also full of drama, with the first three teams, Ambleside, Helm Hill and Dark Peak changing positions on nearly every leg. Keswick Ladies were right up there, with a strong Leg 1 performance by Trudy Beetham and Lindsay Walker but were forced out of the mix by a navigational error on Leg 2. Catherine Spurden and Jenn Mattinson were travelling extremely well all the way up the tough ascents, but first time round Jenn failed to find the tarn on Caudale Moor and lost about 12 minutes for the team. Not giving up, Cat Evans and Hannah Horsburgh ran their socks off and achieved the fastest ladies Leg 3 of the day, a superb performance. This was followed by a strong Leg 4 run by Jo Gillyon and Rachel Mellor, so the ladies finished a very creditable 4th position.