Against the scenic backdrop of the Peak District’s Derwent Resevoir Dam, last Saturday – 29th of October – Keswick AC’s Men’s Team won the British Fell and Hill Relay Championships for the first time in the 36 year history of the event. This victory, long sought by the club, will be remembered for many years by all of those fortunate enough to be involved – either running or supporting.

The Relay is an annual event, which this year was hosted by Dark Peak Fell Runners and brought together 224 teams and almost as many tents. The event is a 4 leg relay, for teams of 6, consisting of 2 paired and 2 solo legs.

The atmosphere of the relays is unmatched in fell running events. At 11am, the leg 1 runners set off to the excited cheers of massed team mates and supporters. Those not running the first leg get the experience of the ‘race pen’! A strange spectacle where anxious runners try to keep warm whilst waiting for their team mates to return, so they can begin their own run. A camaraderie develops between teams in these circumstances – you begin to question what brought you to this remote field, penned in by barrier tape, filled with nervous energy, in shorts and vest, committed to a run over heather and bog in support of your club mates who, you do like very much but perhaps would be equally happy to just share a pint in a pub with. But once off and running the adrenaline takes over, and the race is on! Excitement of gaining places, mixes with fear of being completely consumed by a bog and never found again, or tumbling to your death down a muddy chute. The checkpoints fly by and soon you’re at the last descent to the finish field, a ludicrously steep and slippy hill lined with spectators cheering you on. Into the finish field and whether hopping on one leg (as one poor competitor did!) or sprinting as if at the end of a 100m dash, the cheers of team mates and spectators make it a thrilling experience.

Keswick Men’s A Team were joined by a Women’s A Team, Mixed Team and Men’s B Team.

Keswick’s men had never before won the event, though had won bronze medals two years ago and last year came tantalisingly close -posting the fastest times for 3 out of the 4 legs but on the navigation leg, had a disaster in the thick mist and low cloud that was a feature of the day. So this year, the tension was palpable as James Appleton set off on leg 1, the hopes of the team, and the Club on his shoulders. Showing that he’s now well over the injuries that hampered his summer, James had terrific run, appearing back at the leg changeover in 4th place. Taking over for leg 2, traditionally a longer paired leg, were Carl Bell and Mark Lamb who tore round the 12km leg in what turned out to be the fastest time of the day -superb running from two athletes who have both been in great form this year. Leg 3 -the ‘nav’ leg- is notorious for providing drama that decides the medals at the event. Route choice, and technical map and compass navigation, play a big part as the runners are only given their map and list of checkpoints as they leave the changeover field. Sam Stead had been diligent in his preparation for the challenge -with much time spent at orienteering events and ‘O’ races in recent months. This paid off, as he and Calum Tinnion brought the team in to the final handover in third place. With only 30 seconds separating the first 3 teams, a thrilling race was on and a close finish a real possibility! Charging out of the field on the final leg for Keswick, in hot pursuit of his Dark Peak and Shettleston counterparts, was Jacob Adkin. Not many present would have wanted to bet against Jacob, following victory earlier this year at the European Mountain Running Championships, but fell running is not an easily predictable sport, and there was a palpable energy in the crowd surrounding the finish field. Necks were craned to see who would be the first runner to appear from the heavily wooded final steep descent. Then suddenly there he was! It was Jacob charging into the field…to the cheers of all, the Keswick team with beaming smiles, jumped the fences and surrounded him -you could see how much it meant to all of the guys involved.

At the same time as this drama was unfolding the three other teams from Keswick were out fighting their way up
muddy slopes, across streams and down steep gullies.

The Men’s B team had largely been selected to give a chance to promising and younger athletes from the club, and finished a super 21st overall, and 3rd ‘B’ team. Tom Day set the team off to a brilliant start, finishing 22nd on the first leg. Harry Bolton and Harry Greenbank on leg 2 continued a year where each has pushed the other, Phil Winskill and Jim Howarth handled the Navigation leg admirably, and it is excellent to see Jacob Tonkin back to competitive running, bringing the team home on the 4th leg.

In the Mixed Team, Mike Mallen takes the prize for most committed Keswick runner, joining the team the evening before the relays after an injury left the mixed team one runner short. Rob Jones and Tom Partington, on leg 2, were beaming form ear to ear the whole way round. Rachel Findlay Robinson and Tamsin Moran, both skilled navigators, led a competitive 3rd leg, and Annabel Holmes brought the Mixed team home in 9th.

The Women’s Open Team were led out by Phillipa Wakefield, who ran a fast first leg returning in 13th place, Cat Evans and Jo Gillyon ran a strong 2nd leg through heather and tussocks, Helen Winskill and Lucy Burnett had a cracking 3rd leg, despite and ankle strain which left Lucy limping across unforgiving terrain. After such an amazing third leg it was damage limitation on leg 4! Zoe rose to the challenge and brought the team home in 11th place.

A fantastic day was had by all, a tribute to the joy of running with friends and aiming for the almost impossible.

The organisation of the relays is akin to a military operation, requiring hours of careful planning which will usually be undone by a pesky flu bug, injured runner, flat tyre or suchlike, usually hours before event. A huge debt of gratitude is owed to the Keswick Team Captains who helped to get the four teams to the relay, Women’s Captain Cat Evans and Men’s Captain Steven Hebblethwaite. 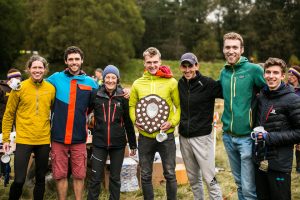