“Just think next year you get another 3 hours” – the prospect of another run across the Lake District was the last thing on my mind having just completed something I had been focusing on for over three years.

I first got involved in the “Jos” in 2008 helping fellow Keswick AC runner Dave Owens. 12 years earlier and in my early 40’s I supported on Legs 1 and 2 and could not believe the pace and speed required to adhere to the schedule – that perception has not changed and has in fact, only got harder as I’ve got older.

I had planned an attempt for the last three years but something always got in the way. In hindsight, a positive from the Covid crisis has provided a focus without the distraction of the annual fell race calendar.

Training had been good post lockdown with numerous recces on the traverse including some back to back legs. I struggled to hit the schedule initially on Leg 1 and was re assured that time could be made up on the later legs if I pushed on – thanks Leigh Warburton and Bill Williamson for those encouraging words.

In early August Eden Runner Stuart Stoddart persuaded me to have a joint attempt on the challenge. Heading towards the end of Leg1, I soon realised the increasing heat of the day would soon put pay to that idea. Stu carried on completing the round within the 12 hours despite the varying weather– all credit to you.

I pulled myself back together and planned for the 12 September which, despite the early start in the dark provided a forecast of a cool clear and windy day – perfect.

Pooley Bridge was closed which meant a slight detour to the start to find Darren Fishwick and Gary Thorpe both about to set out too. Well done to you both and your successful day.

So, at 5.49am, I set off with Stu and Wayne in support. Night quickly changed to daylight with good visibility and the prospect of a great day to be had.

We made good time across Leg 1 with Stu leading, eventually taking off the corner taking us down onto Kirkstone Pass. We were greeted with the “Simons” and not wanting to stop carried on through up Red Screes feeling strong and enthusiastic with what was to come. Wayne stayed with me and we were joined by Simon G as we pushed on towards Dunmail Raise with steady running and now decent dry ground under foot.

I originally planned  to stop at the end of Leg 2 at the road crossing to change clothing and footwear but saw no need and decided to bank the additional time.

Dunmail Raise was full with people and supports providing a real atmosphere as I came through. I continued up the slog of Steel Fell with Simon G still in tow and Gentleman Jim now pushing on ahead.

The ground across to Rosset Pike was sodden and hard work taking off the minutes I had wisely banked earlier.

Climbing up Bow Fell was the worst part of the day, struggling to eat and feeling somewhat sorry for myself. My willing supporters pushed me on.

Running off Bow Fell, I started feeling better and encouraged with my time pressed on to my biggest concern – the run off Great End.

Following 19 minutes of decent we soon arrived at Styhead to meet my last supporters Andy and Steve.

20 minutes under the schedule we climbed up over Great Gable taking an indirect line off the screes down to Beck Head.

A great line from Andy put us on Kirk Fell and we were soon heading up Pillar and into the only cloud of the day.

Dropping off Haycock and running across to Seatallan we could see a figure sat on the eastern face – Stu soon identified himself and buoyed on with his support we approached Middle Fell to be greeted by Simon V who had come up to join us in.

Arriving at Greendale, it was great to be greeted by Jos who had made an unexpected effort to greet the day’s finishers.  A great closure to the day. 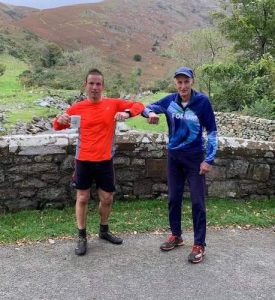 Biggest thank you goes to my friend Simon Veitch for putting in a massive shift driving over 200 miles and ensuring everybody was where they should be – chapeau.

Thanks All ☺ Craig Smith