I’ve always been a fan of Elton John. So much so that Rachael May and I decided to book tickets for his Farewell Yellow Brick Road Tour in Manchester 31st October 2021. We’d booked a hotel and were all ready to go. Rachael’s mates suggested to her to get tickets for when he plays in the Stadium of Light (back home for her in Sunderland) in June 2022. Then all of a sudden I saw a post on Instagram saying he was having to cancel all his remaining 2021 dates. Due to having to have a hip replacement. He is 75 year old. I was still gutted, as I’d already sorted out a sparkly outfit. Our tickets were moved to 3rd June 2023. The day after my 30th birthday. Hopefully I’d be in no fit state to go!I was very envious of Rachael May still going to see him in Sunderland. I’d tried to get tickets, but they’d sold out ages ago….

Moving away from Sir Elton for a moment. The morning of the Great Lakes arrived. I’d been and had my only recce of the route on my birthday (2nd June) with Matko and MMB. It was a lovely sunny day. We added a few bits and bobs to the route. Like going up the massive slabs onto Bowfell, whilst also revisiting Lords Rake. Which was the first time the three of us had revisited it since my Bob Graham, when Mingma had his fall. (For that full story read my Bob Graham report, or even better come see me at work for an hour. I’ve perfected telling that story now!). We made it round in 4:30, were all a bit broken after that and still none the wiser about the Slight Side and Blisco descents. Feet of climb per mile makes this race one of the toughest going. The three of us drove back to Keswick for tea. The pizza oven at my parents was lit and we sat around all evening watcing Martin shovel pizza into his mouth like a human dustbin. Fortunately for Martin we changed the toppings, to avoid him suffering from his worst nightmare, flavour fatigue!

The morning of the race arrived. I was sat downstairs having a morning cuddle with Hector,  enjoying a cup of coffee and scrolling through Instagram. When suddenly I see a post from my friend Vic who has a spare Elton John ticket for his show in Sunderland! Oh. My. God! Ohmygod ohmygod ohmygod! I run upstairs to tell Rachael May and dig out my sparkly outfit and huge diamond glasses. I message Vic and say I’ll take it! I’m over the moon. Today’s going to be a great day, I tell myself, nothing can go wrong! Dot. Dot. Dot….

I’d agreed to help Abdelnoor with owt he needed before the race. So I headed down a laal bit early, listening to Elton the whole way there. Upon arrival  I put to work, shaking a bucket collecting £2 for car parking. It turns out I was the only Keswick runner partaking in today’s race. I had a good crack with Tom Simpson, who initially seemed a trifle worried that Matko was going to be turning up. With me posing absolutely no threat to Tom in the race, he seemed happy to discuss a few lines with me. Corny had already tried to explain the line off Slight Side, but he’d not really filled me with much confidence. I knew that I’d prone get there a similar time than him anyway, so it would be reet.

Ben called us all to the start and it was time to rock and roll. The first climb dragged on a bit, but I was moving well. Once I was over to Esk Pike I saw Matko, who’d come out to cheer me on. He handed me a few jelly babies and gave me a glug of water. He stayed with me till Scafell Pike. We’d caught Corny in this time, so the plan to follow him off Slight Side was going to plan. We made a good bit of ground up on those in front of us as we headed to Foxes Gully. But I’d forgotten how much of a drag it is to head up the Scafell that way. Why anyone goes that way on a BG is beyond me.

At the summit of Scafell we were greeted by a very very enthusiastic Scouser. Who was talking to his GoPro “If you thought hiking was hard, then these guys are fell runnin’. Fell runnin’ mate! As hard as they come. I’m going to attempt to follow one of them to show you how fast they’re goin’!” He said to all his YouTube fans. Unfortunately he chose me to follow. I could hear his footsteps bounding behind me. He then proceeded to actually over take me and shoved a camera into my face. All he said was “Smile mate” and shot off, descending better than I ever have done. Being a little bit distracted by Mr Youtube, I took a bit of a bad line off Scafell. A gap was opening up to Corny and those in front. I better get a waddle on, I thought. At the summit Corny had about a 45 second lead on me. I grabbed a few jelly babies and set off to find this gully he’d been telling me about. Did he say the one on the left or right?! I could see him below, but had no idea how he’d gotten there. Suddenly I found myself on the top of a completely impassable crag and knew I’d ballsed up. I should have just stuck with what we’d done the other week. I could hear voices on my right. I peeped my head over to see a gully. I managed to get over to the gully and began to descend. Half way down I heard a scream “ROCK!” I turned to see a football sized rock bouncing straight towards my head. I threw myself into the side of the gully to get out of the way. It boomed past me and clipped me on the wrist of my trailing arm. Hell fire, that was close I thought. I’d twisted my knee a little in the process of getting out of the way, but I was alive!
The remainder of the descent wasn’t really that fun after that. I just wanted to get down to Great Moss and away from flying rocks. 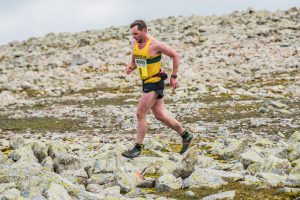 Great Moss wasn’t much better in all honesty. I took a terrible line when crossing the beck, and hyperextended my knee a little and landed in a heap. I picked myself up and set off again trying to run it off. I looked up to see where anyone else was, and I lost my leg down a hole. It was at this moment when I thought today isn’t going to be my day! So I started to think of my upcoming trip to see Elton, and began to sing ..

“Did you think this fool could ever win?

I got a taste of mud in my mouth,

and if you need to know while I’m still standing it’s a fell race!”

“I think it’s gonna be a long long time,

till my legs bring me back to Stool End farm. 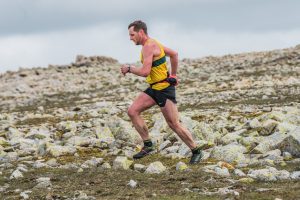 I dragged myself up the penultimate climb. Muttering silly lyrics to perfectly good songs the whole way. Once at the summit I tried my best to get running again but I felt like I was getting nowhere. I smashed a load of food in me ready to climb up Blisco. I moved fairly well up the last climb and gained some ground on a few folk. The whole way up I was envisaging the line Tom had told me for the descent. Down, across, down across…down a steep bit, across a flat bit. Or was it the other way? Down a flat bit, across a steep bit?! Oh crap. I’d gone the opposite direction to anyone else. Feeling fairly confident a line or something would appear I kept going. However, after climbing down my 3rd rock face V.diff route I realised this wasn’t right. Every line I took led me to another cliff edge, most of which had bones lying at the bottom of them. For someone who prides themselves on their downhill ability this was getting embarrassing. I made my way down a final steep rocky section and saw an Ambleside vest out of the corner of my eye. Waaaayyy over to the right. I made a direct line towards them. It was Neil Mckenzie. I caught him up and thanked him for showing up. He asked where the bloody hell I’d been! As he’d counted I had a 20 minute lead on him at the summit. God knows was my only response. I crossed the line in 3hours 32minutes. Laughing to myself about how badly I’d messed that up.

I went over to find Tom (who’d set a new record for the race, well done mate!) and told him his advice didn’t help me in the slightest. He was wincing when I tried to describe my route. It turns out I’d linked all the worst bits together, and avoided any good running entirely. I then went to find Abdelnoor and asked him if next year we can have a recce beforehand, which is something I am vowing to do a lot more of!! Ben said not to worry about today, hoped I’d enjoyed it and rightly pointed out that for the first time in my fell running career I was the first Keswick runner at a proper fell race!

I hobbled back to the van to get changed. I was then invited for a pint with Paul Tierney and Niel. A bit wary it was a cruel Ambleside trap, I followed them to the ODG. Paul said he’d buy me a pint because I’d had a bad experience. I pointed out that he still owed me one for the 3 legs I’d done on his Wainwrights. We sat, drank our pints, ate peanuts and had a good craic. I realised that, despite coming from south of Dunmail Raise, the Ambleside lot are spot on.

Now that the race is done. It’s time to put my sparkly outfit on and sing my heart out at Elton John!