On a sparkling day in Keswick, 471 participants wended their way from race HQ, Keswick School, to the start of the Derwentwater 10 on Sunday, a UKA race put on by Keswick AC and organised by club member, Phil Winskill.

The race, run completely on tarmac, starts at the Borrowdale roundabout and follows the Borrowdale Road to Grange, where the runners then climb to be greeted by spectacular views of Derwentwater as they skirt Maiden Moor and Cat Bells round to Skelgill and then Swinside, via Stair. The runners then run through Ullock and to the finish at Portinscale Bridge.

The race winner was James Douglas of Border Harriers in 53:04, second was Chris Arthur from Blackburn Harriers in 54:03 and third was Keswick AC’s Sam Stead in 54:33. Top female was Joasia Zakrzewski of Dumfries RC in 63:04, 2nd Sophie Wood of Royton Runners and 3rd Rhiannon Douglas from Border Harriers. Keswick AC fielded 23 runners and the ladies team prize was won by Keswick ladies, Catherine Spurden, Sam Ayres and Kerry Cornforth (making her debut for Keswick on the roads). The largest represented club was Royton Road Runners, who bussed in an impressive 49 runners all the way from Oldham, and won a large box of chocolates for their journey home! A full list of results and pictures can be found on the race website:  derwentwater10 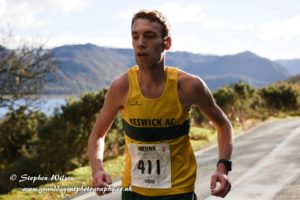 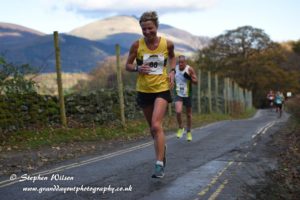