At the end of August this year Boris is leaving Keswick. After being here for 10 years, he’s off to start a new chapter in the Czech Republic. Whilst I am excited for him, I’m also utterly heartbroken to be losing someone who has become one of my best friends. We’re now on a mission to do as many cool things as possible before he leaves us.

So a few weeks ago I agreed that I’d not do Ennerdale so I could run the Coniston 15k Lakeland trails race with him. We’d only just sorted out our entries, when the big man hurt his toe during a staff social football match. He’d put himself into the team as a no nonsense holding midfielder. I’m still awaiting an official match report from the guys at FellPack about this game. As I sadly didn’t believe Boris’s account of the game and how he “danced like Messi around 5 players to score his 11th goal of the first half”. In the second half the ball took an unsavoury bounce, causing what was essentially a drop ball scenario. He went to kick the ball the same time as someone else and the next minute he couldn’t put his toe down. Luckily the ‘Slovakian Hammer’ doesn’t like to make a fuss, so he barely mentioned it and proceeded to (apparently) score another 18 goals before getting a standing ovation from the crowd of dog walkers who couldn’t believe the spectacle they were lucky enough to be witnessing. I have heard that at one point the whole park erupted in a Cristiano Ronaldo style “Siuuuu” celebration.

The day after the toe was completely black. I had to go round to have a look at it and tape it up for him. My guess was he’d had a subluxation at the distal end of the proximal phalanges (a dislocated big toe). He didn’t run for a week or so. Instead he went out on his bike, giving it full Peter Segan mode.

On the Monday before the race we went out for a laal run round Latrigg to give the toe a test and discuss tactics. He then had a go at doing the Walla Dash from FellPack and the Round. All good and ready to rock and roll.

The day of the race arrived. I drove through to pick him up, he was already dressed in full KAC kit. Slovakian flag proudly stitched onto the front of his vest. Due to parking issues we had to arrive very early. So we went and got a coffee from my mate Johnathon and then had a mooch around to look at the last couple of miles of the route. We headed back to the van to don our almost perfectly matching attire. I then stood taking pictures of him limbering up. Then it was time to rock and roll. 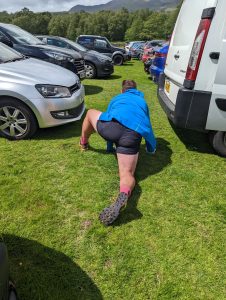 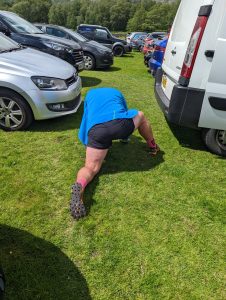 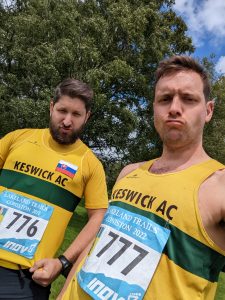 As we lined up at the start we were both raring to go. I decided that I’d push hard from the start and see when the wheels fell off. I wished Bo good luck and it was go time. I lead for the first half mile, but I was having to follow a mountain rescue vehicle, which was kicking up a lot of dust. I was trying to stay out of it, weaving left and right along the track. But the bloody thing took us all the way up to the Copper mines. The atmosphere in the middle of Coniston was fantastic. It became apparent that everyone else at the front was very good at actually running. I knew that I was out of my comfort zone, as it was more about actually running than a fell race would be, but kept pushing. I’d slipped down to 6th or so at the highest point. The descents were too runnable for me to have any sort of advantage. As we approached the second climb the wind picked up (Ennerdale Horseshoe had been cancelled due to the forecast of crazily high winds). I was pushing hard into the wind, struggling to breath. After 5 mins I was caught by a group who were all working together into the wind. I tried to latch on to the back of them, but my solo effort had taken it out of me. The three lads kept swapping as to who was in the front taking the wind. I watched a sizable gap open up between us and felt like there was nothing I could do. I got a little stuck behind a group of runners from an earlier race. I dropped down to 10th. One final push along through the fields to avoid getting caught again and I clung on to 10th. Finishing in 1 hour 9 minutes. I was spent! It’s the second type of race in a week I’ve done that I wouldn’t normally do. So hopefully a change will do me some good. 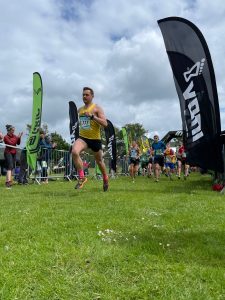 I made an about turn and ran back to run in with Boris. In no time at all I saw him charging towards me! He’d been hoping to finish in 1 hour 40. But he was miles ahead of that. He kept up the pace, and asked me how far the guy behind was. Naturally I said about 10 yards off, just so he didn’t slow down. He crossed the line in 1 hour 30 minutes. I could see the familiar Cristiano Ronaldo run up, then he did his biggest “Siiuuu!!!!” celebration. He was absolutely buzzing with that. 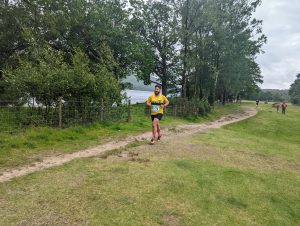 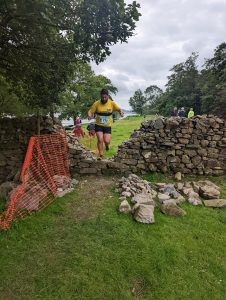 We staggered back to the van and resisted the temptation to go for a swim in Coniston. As the wind had gotten crazily strong again. Instead of hanging around 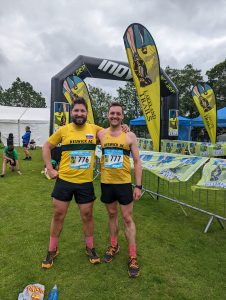 En route back yam we stopped off for a cheeky pint and a packet of pork scratchings. We then spent the night watching probably the worst game of football I’ve ever seen and eating pizza. A fantastic day with my Slovakian best mate.