As I’m slicing two delicious slices of sourdough bread to toast with my poached eggs. Which is my absolute go to breakfast I will add. I ask Rachael May who her three favourite fell runners are. It takes till my toast has popped until I receive an answer. Her top three are ….(please read them in true Bullseye style)….. In one, Matthew Atkinson. In two, Ben Abdelnoor. In three, Lesley Malarkey. I can’t argue with any of those really. Matty is a very good friend. Ben brings us cakes and the bread I’ve toasted with my eggs. Lesley is a legend. Disappointed I’ve not even made her top 10. I decide to quiz her on who her least favourite fell runner is. No surprises, it’s me! I promptly shut up and finish my breakfast.

The last time I ran the Coledale race was in 2018. I finished 82nd (out of 365 runners) in 1:32:28. I remember struggling going up Grisedale Pike. I could see my best running mate Craig Marsh pulling away from me on the climb. I scoffed a gel and hoped for the best. I eventually caught him and on top of Barrow we were neck and neck. It had started to rain so it was going to be greasy. I pushed hard from the summit to open up a gap and spent the whole time hoping I hadn’t not ‘gone for it’ too soon. Unfortunately Craigy took a slip which cost him some time, and allowed me to take the win. As I drive to the race I can’t help but wish that he’d entered and didn’t have to work.

I park my van up and have a leisurely stroll up to the Atkinson’s farm. I’ve been asked to bring spare kit with me, as the whole Atkinson family are running today. William borrows my spare waterproof pants. Matty decides it’s too hot for a hydration pack and takes a bumbag, before deciding he’ll go cash in some Pete Bland vouchers and get himself a new one.

After they all stopped faffing (something Matty is notorious for!) I go for a bit of a warm up. Trotting up Barrow with Glyn Blakey and Jim Haworth. Jim tells us that he’s had his foot trodden on by a cow this morning and it is causing him some grief. As we carry on I make an embarrassing confession to them both. Rachael May and I often go to bed early so we can lie in bed and watch videos of the “Hoof GP”. It has (almost) become our favourite pre bedtime routine. For any of those unfamiliar with the Hoof GP, he makes videos whilst tending to cows’ hooves. Picking out stones, teeth and metal nails using various instruments. There is usually always some explosion of puss. It’s gross but we both find it fascinating. This prompts Glyn to ask how old we actually are. The conversation soon turns to which way we’ll be allowed to come down Barrow. We squeeze out a pre race wee whilst discussing lines. Then trott down and get ready to go. 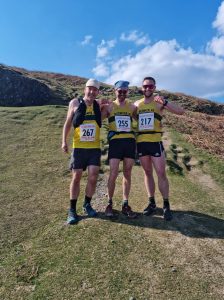 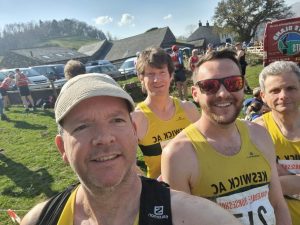 The sun is blazing down on us as we stand at the start line. The last thing I remember thinking before the start was “maybe I should have taken some water with me”. Too late now, we’re off!

I despise running up Grisedale Pike. It’s a horrible combination of runnable, steep, rough, grassy and long. Last time I raced it the climb took me 45 minutes, half of my race was going up there! I soon settle into a rhythm and wonder how soon I’ll be reduced to a walk. I look ahead and see I’m right behind Sam Stead. “Maybe I am going well” I think. Oh wait, no he’s walking. I ask if he’s alright, to which he replies “No. I’ve not been feeling very well all week. I think this was a bit of a stupid idea really”. I tell him not to push it if he’s feeling crap.  Halfway up the first steep section Jordan Palmer pulls up alongside me and puts the burners on. I have to remind myself that I am in a race, but I’m also very keen not to get carried away too soon. On the next steep section I see Mark “Goldie” McGoldrick lying on the floor with his head in his hands. He’s also not feeling great. I check he’s alright and if he needs a hand down but he tells me to “keep those sexy legs going”. I manage to run up all of the second steep section, and even catch a few folk up. Suddenly Goldie comes striding past me. He’s going to get around even if he’s feeling crap. In reality it’s probably just because he’s from Yorkshire and has spent money on fuel getting here! I try to tell him that if I beat him he’ll never hear the end of it. I’m just pipped to the summit by Simon Netherway. But I’ve gotten there 5 mins quicker than previous times. As I push on down from the summit I find myself in a small pack of four, Simon and Ambleside runners Paul Cornforth and Jon Deegan. Coming into Coledale Hause on a lovely grassy section I took a rather dramatic tumble. Right in front of three people with cameras, I will add. We then started up the scrambly climb of Eel Crag (or Crag Hill). As we left the shade and reentered the sun, the temperature had noticeably gone up a few degrees. The ground was completely bone dry. Would it make for a fast descent or would we all get blisters? Let’s worry about that later. The four of us had stayed together nicely till the descent of Sail. Simon was first to go, then I managed to overtake the other two and catch him coming down from Sail pass. We could see another group of folk ahead of us and we both went up a gear. Luckily for us, the group in front decided to turn left and head up towards Stile End. I shouted to Simon to stay right and we managed to over take them all. 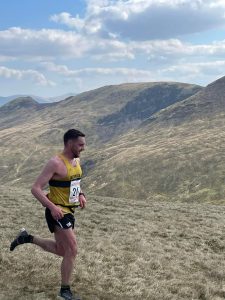 Heading up Barrow was like an oven. My legs were starting to wobble in the heat. I’d run 10 steps and then have to walk 3. I repeated this until I saw people then thought I had to run really. My Mam, Dad and Rachael May were all on the summit. They were surprised to see me so high up the field. I don’t have the energy to smile, wave or say anything funny. I just want to get this race finished. I set off down Barrow knowing it’s not going to be my fastest time. My feet were on fire and I’m aware I’ve large blisters forming underneath both heels. The quicker you go the faster it’s over I think. Each step they are getting worse, maybe I should have worn my new carbon fibre road shoes! Despite having to stick to the path coming down I made it from the summit to finish in 5:26. Overtaking a couple of folk on the way. I finished 23rd place, setting a new pb of 1:27:25. I’m very happy with that. 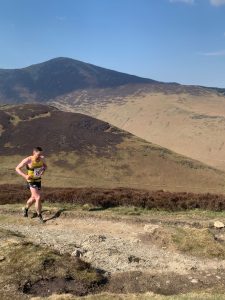 I join a large heap of folk all panting on the ground. Everyone with their shoes off and also complaining of blisters. The juice at the end has never tasted so good. I eventually get myself up for a cool down. Glyn comes over to tell us that he had also had a bad do going up Grisedale Pike. A woman kindly gave him some food and water and then walked back down with him. He was still smiling and seemed happy about going to re-hydrate at the pub. As I’m walking over to see my parents and Rachael May, Matko’s grandad asks “Is the tape on your nipples to stop milk coming out!?” I laugh and tell him that’s nicer than the real reason. I have very sensitive nipples and find Keswick AC vests like cheese graters when I’m sweaty. This can leave me looking like I’m wearing a Sunderland football shirt. My nipple tape continued to be questioned. It was just too nice to put a top on. This is after all probably our summer! 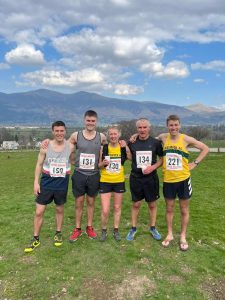 The whole Atkinson family made it round and won the prize for fastest family!

Full results can be found following the link…

A huge thank you to Ellenborough and all the marshalls for a fantastic race. I’m off to sit in the garden with a beer and try and pop these blisters with a safety pin. If that doesn’t work I’ll have to call my mate the Hoof GP!