I have come to the conclusion that owning a dog is rather stressful. However, as a whole the positives massively outweigh the negatives. My dog Hector (Hecky Bobs for short) is still only young. 1 year, 4 months and 20 days old, to be precise. He’s the second dog I have had. My first was George, who we sadly lost a few months before his second birthday. Grief has a strange ability to make us forget the bad and only remember the good. Hence why to us members of the Tonkin family George will always be a saintly figure. Whereas Hector is a right little devil. He’s the definition of ‘second child syndrome’. He’s very excitable, occasionally a bit grumpy, and at times does whatever the hell he wants! As stressful as it may be, at least there is never a dull moment. Despite all his flaws, he is a very loving little boy. Who gives his unconditional love to anyone who shows the slightest bit of interest in him.

Leading up to the Clough Head race I saw on Strava that Cal Kitching had been out for a recce. Though judging by his Strava trace he’d gone walkabout on the descent. I messaged him and suggested that we have another recce so I could show him where to actually go. This was of course extremely kind of me, as he hasn’t been that far ahead of me in the last two races. By showing him where to go I’d probably be waving goodbye to my chance of beating him.

On the Wednesday before the race I picked up Cal and Jake Collier for a lunch time trott around the race route. I parked my van outside my grandparents house at the Quarry and got ready. As I opened the rear door to ‘release the beast’ (Hector that is). It was brought to my attention that Cal isn’t overly fond of dogs. As far as Hector was concerned Cal had just lubed himself up with gravy. As he has a fantastic ability to latch onto those who don’t like dogs and annoy the life out of them.

He was very excited to be going for a run with two new friends. He’d also not been out yet that day, as I’d been working in the morning. He pulled and barked all the way until he was allowed off the lead. As we trotted up the side of Threlked Knotts I was bragging to the lads that the only thing Hector can do is not go after sheep. I’ve spent a lot of time training him to ignore them. All of a sudden the wind picked up, which can excite him more. I looked up, and he was running towards a sheep. Not for very long I will add. The sheep legged it away and Hector came back to me. With a face that knew he was in trouble. It is the first time he has done that in a long time. “Come on mate, calm down. Please!” I growled. After a telling off he didn’t even look at another sheep.
Normally when we are going for a run with other people he’ll be very excited for the first 10 minutes then calm down and be a good boy. But not today! On the last push to the summit, half an hour in, he decided that he’d develop an obsession with Cal and his jacket sleeves. The act of me trying to stop this was only making him even more excited, meaning he thought it was a game. Eventually he gave in, and fortunately Cal’s jacket survived. At the summit me and Cal pushed on leaving Jake a little. Hector followed us down. We turned to see where Jake was. Was he limping a little? As he got closer he told us that Hector had just jumped up and hit him cleanly in the crown jewels. I was mortified. I wanted the ground to swallow Hector and I up. I apologised and asked if he wanted me to rub them better. He respectfully declined.

An hour into the run I could finally relax a little, as Hector had finally approached that magic part of a run where he calmed down. I thought it would never happen. We made it back to the van without any further incidents. As I opened the door he jumped straight into his bed, which normally means he is aware he’s in trouble. I apologised for the 15th million time to the lads.

“I don’t think we’ll be invited again Hec” I sighed as we drove back home. He is a lovely lad really. Just a young and very excitable pup. I’m trying my best to give him a fun and exciting life, but at times like these it is a tad stressful. I hope I am not alone in having a bonkers dog! 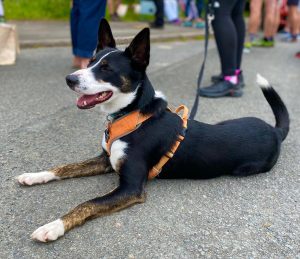 The day before the race we found out that all these recces had been in vain. The forecast of very high winds meant the team at Kong had decided to use the bad weather route. At first I was selfishly miffed. Nobody ever wants to run a bad weather route. Then I thought of the poor marshals who would be battling with the wind at the summit. It would be bad enough for them on Threlkeld Knotts!

As I lay in bed early Saturday morning I could hear the wind and rain battering against the house. “Do I really want to be racing in this?” I thought to myself. The answer, sadly, is always “yes!”. I drove from my house at Thirlmere to Threlkeld Quarry, where amazingly it wasn’t raining. I put every layer on that I’d brought to go pick my number up. As we were lining up Corny said that he’d been out last night to flag the route. Maybe not the best idea considering the wind. Any stray flags will probably end up in Penrith.

I realised that it wasn’t actually that cold so I stripped off in the van, before heading for a warm up.

At the start line the Keswick and Ambleside runners looked like boys and girls at a school disco. Ben Abdelnoor was shoved over to us by Jack Wright who said “Oi Ben, your mates are over there!” behind him sniggering stood Paul Tierney, Tom Simpson and Harry Shuell. I extended the hand of friendship to Ben (who is infact a social member of Keswick) and met him halfway between Yellow and Blue divide. 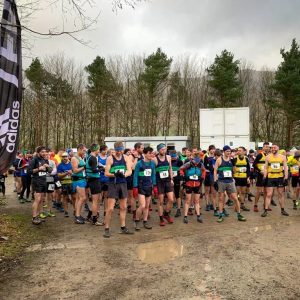 The start of the race felt a lot faster than recent weeks. I was miles behind the leading group. Back in my rightful place I thought. The wind was tossing the skinny racing snakes round like rag dolls. For a chunky runner like me I could stay straight and true. I managed to run every step of the ascent, when others had gone down to a fast walk. Just keep tapping away I thought. We reached the top and had the wind behind us. I was aware that a shorter route meant a significantly shorter descent. As we turned at the top I set myself three targets. 1: Lee Procter. 2: Jack Eyre. 3: Hamish Murray. Time to go to work. Hamish had a bit of a lead on me at the summit. Whereas Lee and Jack weren’t far in front of me, but both are good descenders.

Amazingly, the first one I caught was Hamish. When I say caught I mean physically wrestled past. He hesitated for a moment at the top of a rocky section, which meant I ran into the back of him like a Morecambe and Wise routine. I tried to grab him so he didn’t fall flat on his face. “Sorry mate!” I shouted, as I thundered down.
The next target was Lee. Who had evaded my capture in the S.O.B race, and I wanted revenge! As we hit the Old Coach Road the gradient significantly flattens. Due to the fact I am not actually a very good runner, I worried he’d pull away from me. A sudden gust of wind meant he stumbled slightly. So I took my chance and pushed into the wind to get past. I knew there would be no room for easing up, and committed myself to catching Jack.

Pushing hard down the last section of track I was running out of road. If it had been a longer route I’d have maybe caught him. But not today. In the words of the late great Meatloaf “2 out of 3 aint bad!”. 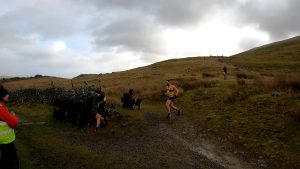 I finished in 25th place, 30:06. A whole 5 minutes quicker than in 2020. Once I’d caught my breath, I went for a cool down jog with Ham Sooper and Cal to cheer folk in. My family had braved the wind to come watch. Sam’s mum had brought their dog. A 12 year old Collie cross Kelpie (same as Hector). As we stood talking I caught Cal giving Sam’s dog a stroke. I loudly shouted “Hell you’ve changed your tone!” Cal quietly replied “I like calm dogs like this who aren’t trying to eat me”. “Fair enough!” I laughed. 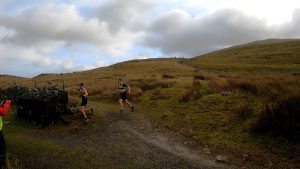 Keswick men took the team prize. Ahead of Ambleside in 2nd. No doubt this will cause Ben Abdelnoor a few sleepless nights. As he’ll now face the dilemma as to what vest to wear at his next race. Keswick ladies also won the team prize.

Once home it was time to take the beast out. We ran him up to Harrop Tarn, his favourite place on the planet. Descending down we focused on him running to heel. Which was very successful. During runs like these he doesn’t put a paw out of place, and is an angel. He was rewarded with toast crusts. 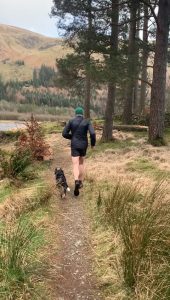 A good day was had by all.

Many thanks to the team at Kong for a great race. Well done and thank you to all the marshals who braved the strong winds!