The penultimate race in the Keswick AC club Road Championships was run on Sunday 17th Nov with 17 Keswick runners battling it out in Border Harrier’s Brampton to Carlisle 10 mile road race.  The field of 689 was one of the biggest in recent years with runners from the big city clubs joining the local line up on the oldest 10 mile race in the country.  Charlie Hulson of Liverpool Harriers showed everyone that running a 4.45min mile pace can give you a winning time of 47.24!  Philip Sesemann of Leeds City was only 21 seconds behind closely followed by Marc Brown, a former KAC member, under the 50 min barrier in 49.41.  Sam Stead already in an unbeatable position in the Road Championships went even further ahead coming home in 12th  overall in 53.02.  Calum Tinnion only 54 seconds behind Sam finished in a very respectable 21st in 53.56.  With Daniel Millss in 50th place they were 4th men’s team on the day.

In the ladies race, Rachel Mellor and Lindsay Walker put on a fine display of distance running, showing they have both recovered from injury and returned strong to their sport.  Rachel sealed her victory in the club Road Championship series with a time of 1.11.05 and 1st LV40, closely followed by Lindsay 2nd LV40 in 1.11.38.  With Trudy Beetham finishing in 1.12.49 they scooped the 3rd LV40 team prize. 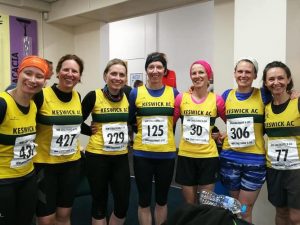 Mike Mallen has now completed 4 races out of 7 and seals victory in the men’s V60 category.  Steve Angus moves closer to taking the MV40 prize with one race left to complete, the Langdale Christmas Pudding on 7th December.