“I mean this in the nicest possible way… But you’re disproportionately good at reps” panted Sam Stead. We were a few reps into a killer Club Training session on the road by Milbank Garage. 5 x 1 minute efforts, 5 x 30 seconds finished with 5 x 15 seconds, expertly led by Phil Winskill. Sam said this to me after the 3rd rep of the night. So in my mind I had to keep it up and stay ahead. Else god knows what he’d say next! It almost killed me, and my legs ached for a few days. I thanked Sam for the bit of extra motivation for the session, then hobbled home.

My dad, Norman, as a youngster was a very good sprinter. At school he was the only person to be Victor Ludorum two years on the trott (in1968 and 1969). My sister, Evie, plays rugby internationally as a winger. Despite being a ‘fat lad’ at school I was still able to get up to a good top speed on sports day. I guess sprinting is just what us Tonkin’s seem to be good at. We’re not very tall, have broad shoulders and strong legs. Built for power, and not endurance. However, I wanted to follow the footsteps of my Grandad, Pete Parkins (on my mam’s side), and become a fell runner.

I’ve always had an issue about my weight. When I started running I was 13 ½ stone. Which meant I was around 2 ½ stone lighter than at my heaviest. This meant I was still one one of the larger fell runners. Most of my good friends in this sport are the creme de la creme of fell running. Having the extra weight means on training runs with them I am always at the back of the group during the climbs, sweating away and struggling. However on the downhills, I can close the gap and keep up.

As a newbie to the sport I was desperate to lose some more weight. I didn’t look like a lot of the other fell runners. I felt desperate to lose some more weight. In my mind I’d convinced myself that to get better at running, I would need to be under 12 stone. As I got to know more and more about this fantastic sport. I had a brainwave. What goes up, must also come down. One morning I decided that I was going to put my weight and power to good use. I would make myself a good descender. So I started secret downhill training on Latrigg. Which quickly progressed to higher fells and rougher terrain. I could see and feel the results quite quickly. I knew I’d never be in the same league as a lot of my mates going uphill, but if I could use the momentum I’d create then I’d always have a good downhill. Maybe being a heavier fell runner wasn’t such a downside after all.

At the time I felt like I was training quite hard. I became less and less obsessed with being at a racing weight, and more keen on improving my enjoyment levels. This quickly saw my racing performances, and confidence grow.

In a race these days I like to back myself to set one of the fastest descents of the day. I still like to think I’d be dangerous if I could run uphill well. However, with all the troubles I’ve had in the last few years, I am simply happy to be physically well enough to compete. My mindset is now that enjoyment levels are the most important aspect of life. 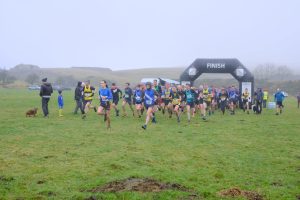 It was the first of the Keswick AC club champ races for 2022. Late on the Friday evening before the race Les Barker messaged to say that Cumberland Fell Runners (CFR) and Keswick both had about 37 runners from each club entered. He’d come up with an idea to battle for a big team prize, with the top 35 finishers from both clubs would score points.

It was a claggy day out west. We’d arrived an hour early as there was a bit of confusion as to what time the race started. So we had to sit in the van for a while watching the rain on the windscreen. Rachael May was nervous as it was only her second fell race. She’d been worrying about being the last runner all week. “As long as you enjoy it and try your best it doesn’t matter what position you are in” I said to her. I braved a warm up and straight away bumped into my beloved Craig Marsh. Who would be competing in his first fell race in almost 3 years. I was very glad he’d entered and he was up for the race. I explained the route to him as we warmed up, as he’d not had a chance to go for a recce. I reassured him that it was a route which suited him down to a T. Even though he claimed to be unfit, I knew the pair of us would be on for a proper race. As much as we are best friends, our rivalry can at times be quite fierce. I am always in awe of how hard he can push himself when it matters. Craig and I have been best mates for the last 5 years or so, having first gotten to know each other at the Anniversary Waltz race in 2017. Like me Craig also lost a lot of weight and took up running. This year will be his first year as a V40, which I think has given him a lot of motivation to start racing again.

The race started by crossing the show field, into an even boggier field, and straight up the long gradual climb. At the front of all 130 odd runners was Craig Marsh, nailing it across the show field. Good lad Craigy! I tried to catch him up, overtaking Abdelnoor along the way (making a compulsory racing car noise as I went). This fast start lasted until we started to climb, then the likes of Lamby, Matko, Barry Holton and Abdelnoor overtook us and normal service resumed.

Early on in the race I jostled for places with Craig. As we approached the steep boggy climb to the summit of Gavel he pulled away from me. “Don’t panic” I told myself “You’ll see him again”. I looked up and saw Harry Bolton leading John Battrick, Matko and Lamby at the front of the race. As we spun around the summit cairn I realised everyone in front of me had crossed the fence for their descent.On my two recces I hadn’t crossed it. Crap! What should I do? Stick to what I know or chance it. Where was a CFR runner when you needed one!? In the end I hopped over the stile and hoped for the best. I saw a flash of blue on my left, it was Sophie Likeman, who’d not crossed the fence and was moving fast. That way must be faster I thought, as I nearly lost a shoe in a horribly boggy section. Half way down I saw Ivan and Jim Haworth on their ascent so I quickly shouted at them to stay on the left of the fence. Sophie had overtaken me, but I’d gained on Craig.

I chased the pair of them up Blake Fell. The leaders were on their way down as we approached the summit. Sophie had caught Craig, and I wasn’t climbing very well. I was starting to think it was all over, Craigy is a good descender afterall. A few words of encouragement from Gavin Pattinson spurred me on. So I went for it. I could just about see them through the clag. I hoped Craig would stay just behind Sophie so he could follow her line and traverse around the lumpy section of the long grassy descent. However I need not have worried, as he overtook her and hit the line. Amazingly, Sophie climbed up and over the lump. As soon as I saw this I hit the muddy traverse hard to gain on her. I managed to catch Craig at the top of the steepest part of the descent. If I went too hard too soon he’d inevitably catch me again, so I’d have to time it exactly right. As we came down I saw him veer slightly to the left. “This is your moment Jacob, go for it!” I told myself. As I reached full speed I nearly flattened a poor child who was standing with her dad taking photos. I seemed to be the only one to stay to the right. As I battered down the heather my legs were screaming. “You have to keep this up or else he is going to catch you” I kept saying over and over in my head. 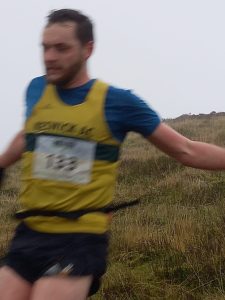 The final flat section felt as though it lasted for forever. As the gradient flattened it was playing more and more to Craig’s strengths. It was hard to keep the speed up after such a steep section. A quick glance at my watch told me I was still managing 6 minute mile pace. Hold on lad, hold on! My lungs were on fire, I had snot all over my face. I could hear footsteps echoing behind me. I did not dare turn my head to see where Craig was. As I turned to enter the show field I visualised doing one of Phil’s minute reps from Tuesday night. I gave it all I had left. I crossed the line and folded like a deck chair. 16th place, in 43:39. What a fantastic race! Pushed hard to the end by my best friend, favourite training partner and today’s biggest rival. What a run he had! 18th overall and 3rd V40, in 43:57. Welcome back Craig Marsh. 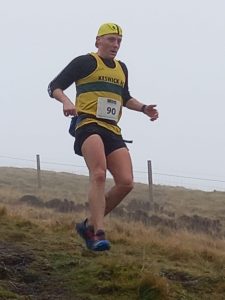 We had a cool down trott back along the track to go cheer Rachael May in. She was looking happy, remarkably calm and comfortable when we found her. She even managed to drop both of us with a strong sprint finish. She wasn’t last, but most importantly, she’d enjoyed the race!

There were loads of happy faces at the end. Lots of people were competing in their first or second ever fell race. Keswick beat CFR to the super dooper team prize! Which I believe will become an annual event.

A massive thanks to CFR for a great event. Next up is Clough Head next Saturday (29th January). Which is a fantastic event for those who love a steep climb. For those like me, just cling on for dear life until the descent. Then absolutely batter it! Above all, enjoy it!

P.s. I realise that I’ve spoken about a few topics which some people within this sport struggle with. So please know that whilst I have no professional training within these matters, I have had my fair share of issues. So if you ever need to talk to someone about it, I will lend my ears to anyone who needs them. I can also reassure you that you’re not alone.