Uphill has never been my strong point. I’m 12 stone of prime Cumbrian beef! That being said, I once flew all the way to Bischofshofen, Austria, for an uphill only race up a ski jump. I made Rachael May come with me to cheer me on. We flew out to Munich a few days early to fill our bellies with vast quantities of meat and beer. I’m sure Kilian Jornet will agree that is fantastic race prep! We jumped on to the train and headed south to Austria to the small town of Dorfgastein. Where we’d booked a lovely typical Austrian guest house for a few nights. 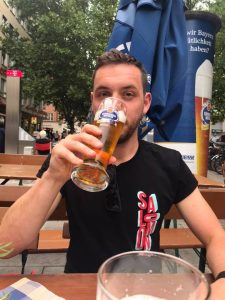 Once we’d gotten settled in I had a run down to Bad Hofgastien to get some food for a picnic tea from the local Billa. It was lovely to have a pootle around in the summertime, as we were only a few train stops north from where I used to live.

The day of the race arrived, we jumped on the train to head north for a few stops. Rachael May asked me how long I’d be out for, as I didn’t seem to be taking much stuff with me. I said “Hopefully about 4 minutes”. She laughed and said “Yeah right, you wish! How long will you really be gone for?”. I was a bit confused and replied “You know it’s only 400m long right!?!”. Her face dropped “We’ve come all this way for a 400m race!! Are you serious!?” I laughed nervously and said that I thought she knew that’s what it was. Luckily we’d arrived at the station, so I hopped off before I was pushed off.

Upon arrival the ski jump looked absolutely huge! Rachael May started to laugh “Good luck with that son!” she jeered. There was 400 feet of ascent in ¼ mile. The atmosphere was fantastic. We were given so much free food and drink it was amazing. The vast majority of folk seemed to be drinking as many cans of Red Bull (who were sponsoring the event) before the race then hoping it actually did give them wings! I decided against that after seeing a fully grown man nearly soil himself as soon as he set off.

Unbeknownst to me the race was to be run in heats. With the fastest times progressing to a semi final then a final. I’d watched a few heats before me and saw that most people were finishing around about the 5 minute mark. So that was my target. I stepped up to the start line, the whole stadium went quiet. Then boom! Off we went. I imagined I was going up Spoony Green, the only difference was the cargo net on the floor and there was no Mark Lamb to follow. Halfway up I realised that I was in 2nd place. Could I actually win this I thought?! So I channelled my inner Mark Lamb and ran like death. The burn in my lungs was unreal. I kept pushing and overtook the chap in front, I was actually leading a running race. I crossed the line in 4:29 and shouted “Get in there! Ja!” I crashed on a giant crash mat which had been strategically placed at the finish line. Once I stood up I was asked if I’d say a few words into a microphone. The man asked how I was feeling and told me that I’d ran the quickest time so far today. Then he said “Go get yourself ready for round two!” I had 20 minutes to recover before the semi final. I could barely walk back down it was so steep. In the build up to my semi final it was all about me on the tannoy. “And now the first semi final, featuring the fastest man so far today. All the way from England….. Jacob Tonkin!”. 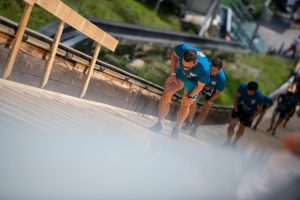 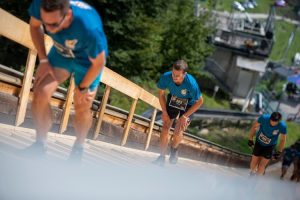 I finished second to last in 4:44. I completely blew up. The others all knew it was run in a heat formant and got quicker and quicker as the day progressed. If I’d have ran the same time I’d have maybe just about squeezed into the final. The winner was a lad who toured round the world doing these sort of events. His times were 1st heat 5:09. Semi final 4:15. Final and new world record 3:44. Crazily fast! I still think I’d have beaten him if it was going down and not up! For Christmas that year Rachael had Jim Tyson draw me a picture to celebrate me finishing first in a race for the first ever time. I still have it up on the wall! 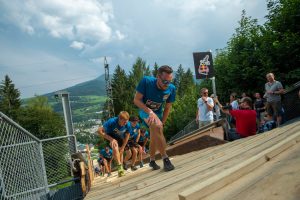 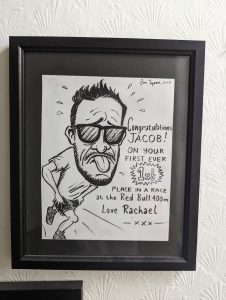 That race in Austria along with the Wansfell Uphill race were my only experiences of an uphill only race. Until the Belt Up Blencathra race…

I struck luck and managed to park in the layby heading up to the White Horse. I jumped out of the car and had a catch up with John Duff (Northumberland Fell Runners). We discussed routes as we were walking up to the pub. As I turned around to point at a line I might take, I saw young Chris Richards. Or as he is affectionately known in my family “Asian Chris”. In November last year my Grandparents hired a holiday house in Staveley. I took the week off work so I could spend time with them and the rest of the family. It was actually really nice holidaying in your own county. I’m guilty of only going places in the lakes for the day and can’t remember the last time I stayed somewhere else properly within the Lake District. Anyway, whilst I was there I met up with Chris for a few runs. When anyone asked who I was going out running with I replied Young Chris Richards. When I was arranging our second run my dad (Norman) turned to me at dinner and asked if I was going out running with my Asian friend. I looked a little confused. “Your Asian friend Jung who you went out with the other day!” he said. “I’ve no idea who you mean sorry Norm” I replied. “What was his name again…oohh… ermmm…Jung…..Jung Chris?” I immediately fell about laughing “He’s not Asian Norm. He’s from Kendal. He looks about 12 which is why I’ve been calling him young chris!”. Sadly the name has now stuck and he’ll forever be Jung or Asian Chris.

I pinned my number on my chest and went for a warm up with Glyn. Who was considering taking an alternative line up. Instead of flogging himself straight up, as most people would go, he was going to go to the right first then zigzag up on the path. I opted to just plough straight up following the pipes. Earlier in the day I’d accidentally taken a large chunk of hair out of my beard. In an attempt to save it I’d make it even worse. So I cut it all back to leave a rather dashing moustache. Which naturally received a lot of comments. I was hoping it would either make me faster, or take the attention off how slow I was going! 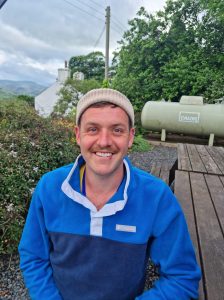 My race started pretty well. I managed to move well over the first steep section. Caught a few people up and was actually running it all. Though the heather and grass grew thicker and I was reduced to a power hike. I looked at my watch to see I’d only been going 5 minutes. Oh dear, this is actually really going to hurt, I thought!

About half way up I’d lost a bit of ground to folk and was aware I wasn’t going as well as I’d like. In the distance I could make out the familiar mullet red jacket combination of Ben Abdelnoor. He’ll give me a good one liner to help ease the pain. As I approached him I could see he had a rather blank expression. All he said to me was “Well done Keswick”. I was too tired to shout any abuse back at him. Well that was an odd thing to say I thought! I then started to panic. Was he still upset with me for making us drop out of Old County Tops!? 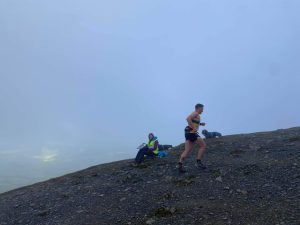 After seeing Ben I got my first glimpse of the summit through the clagg. Still quite a way to go. I looked at my watch and saw I’d been going 18 minutes. It felt like 18 hours! I kept trying to push hard, though everyone in front of me had opened up a sizable gap now. One final push straight up the zigzags past Steven Wilson (who did recognise me!) then onto the summit. I reached the top in 30:23. I’ll admit that I was a little disappointed with my result, but I know that this race didn’t play to any of my strengths at all!

I ran down to had a trott back down to the pub. En route I found Ben who admitted to me that he hadn’t actually recognised me when I ran past. Then gave me a bit of stick about the hair on my top lip. At least that was taking attention away from my result!

Once I’d downloaded I didn’t hang around for prize giving. I wanted ot get back yam for my tea. It’ll come as no surprise that young Chris Richards took the win, with Scout Adkin coming 1st lady and 3rd overall.

This race was also a counter for my Keswick AC Uphill Club champs. The updated leader board can be found on the website…. http://keswickac.org.uk/club-championships/ ….. But as it stands Glyn Blakey and Louise Brown are in the lead for the men and ladies respectfully.