My Nana and Grandad ran Longthwaite Youth Hostel for many years. Which meant my mam and her two sisters grew up ‘up the valley’, and naturally they all went to Borrowdale school.

Like most kids I was brought up listening to stories of my parents adventures from growing up and times at school. With such strong family roots in the valley, it means that for as long as I can remember, I have wanted to live up Borrowdale.

My Aunty Della is a teacher at Borrowdale school. In the summer holidays my sisters and I would often end up spending a fair bit of time at her house in Rosthwaite. We’d explore, make up plays then record them on her video camera, premake things to enter in the Borrowdale Flower show, and have just generally have a great time. I have seen Aunty Dell teaching and she does exactly the same with the kids at school as she did with us when we were younger. It’s really lovely to see them getting the a new generation of kids enjoying the same things I did!

At Christmas time Aunty Dell was asking me if I’d have a think of a fell race route that the school could use. They’d already set up the “Borrowdale Boot” challenge to give the school running club a challenge, and to raise the profile of the school. They even had an article about it in the latest Fell Runner magazine. I suggested doing the climb up Bessy Boot from the school. Which I’d only ever been down before. Which, for the record, I hated. I thought it wouldn’t be half as bad if you went up it.

In February this year I was contacted by one of the parents from the school, Mel Mustafa. Who told me they definitely wanted to put a race on and if I had a copy of the route I’d suggested to Aunty Dell. Sona few days later I went out and have a run round the route, and sent Mel what I’d ran on Strava. It was a while till I heard anything off her after that. I was beginning to worry the route was not exactly what she’d hoped for, or was too hard. The initial climb is very tough going. Then once up it’s a labyrinth of false summits, bogs and tussocks. But is had a feel of a proper fell race route.

At the start of May she messaged to say the race was all approved by the FRA and ready to go ahead on the 13th July. They’d set up a page on the school website and everything. I was quite excited that there would be another race in a special area to my family.

In the weeks leading up to the race I found any excuse to go for a recce. I messed around with lines and pretended I knew where I was going. A lot of people asked me about the best lines on the route. Most of the people I know who went on a recce ended up taking a few wrong lines. I’ll admit I did go slightly wrong on 3 out of the 5 recces I did. But to everyone I’d become ‘route master Tonk’. Though through orienteering I have learnt that a recce of the general area is a very handy thing to do.

The day of the race arrived. I finished work, came home, picked Rachael May, Nana and Grandad, then headed up the valley. It was a beautiful evening for a race. At registration it became apparent that I was one of the only ones there who’d done a proper recce. “Great. That means everyone else is going to what to follow me!” I thought. I felt like I had a huge target on my back. I knew I wasn’t fast enough to lead the race for long, but I was keen to avoid getting stuck behind folk through the bracken. I was wondering how long it would be till I blew up.

I’ll admit I was a little nervous. I’d be running in front of my heroes (Nana and Grandad) and a lot of family members. I’d not want to set off too fast and embass myself.

We all lined up ready for Billy Bland to set us off.  When a learner driver approached us all. They then executed the slowest 3 point turn in the history of driving. It must have been quite intimidating for the poor soul having all of us watching. Once they were out of the way it was time to go. 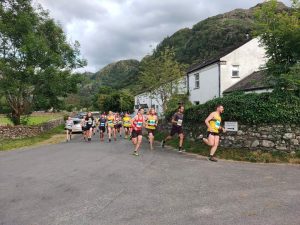 Billy dropped his hat and I set off like a steam train. Past the church, through the farm and getting into the bracken first. “Hold on son!” I told myself. I could hear Rachael May, Billy Cartwright and Nicola Jackson all cheering me on.

It felt like nobody wanted to over take me. Eventually two lads pulled away from me, but we’re a long way over to the right. I stuck to my lines and  kept pushing. 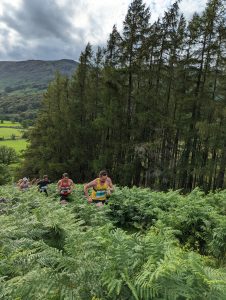 At the scrambly section I’d been over taken some more. Hardly surprising considering how fast I’d set off. I knew the next section would catch a lot out, so I consciously slowed down a little to let some past me. Once they’d gone past I sped up again.

At one point 3 lads ran right across me. Two of them turned their heads to see where I was heading. I ran behind a bump and hid behind it for a few seconds, in true Billy Bland style. Once I saw them carry on in a different direction to where I wanted to go, I pushed on hard to reach the summit.

I had absolutely no idea where I was at position wise, but I could see Rob Brown down at Tarn at Leaves. I tried to look good for Stephen Wilson and then knew it was time to bring the thunder!

So that’s what I did. I hammered down to the tarn. Beginning to wonder if I’d catch Rob or even see him again. As I came round the corner there was no sign of him. I stuck to my line and nailed it down. 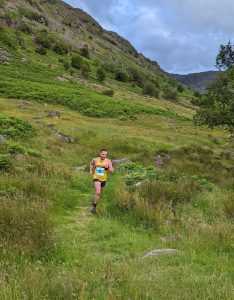 I was scanning around for him, whilst trying to not trip over. As I reached the wall at the bottom I’d caught Rob, and could see the chap in front. Rob said that was 2nd place. “Oh my god! I’m in 3rd!” I thought. As we hit the single rocky path Rob let me past and told me to catch him. I pushed on and tried to put a bit of distance between myself and Rob. 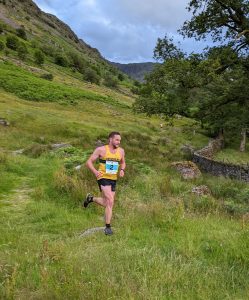 Around the last corner I was cheered in by the school kids and parents. I’d actually hung on to finish 3rd. My highest ever finish in a fell race. I was over the moon. I turned round to celebrate with my family. But wait. Not one of them were there to witness it. Turns out they were all stood around the BBQ stuffing their faces.

I had a cool down and cheered folk in. Arrived back at the finish to see my Mam and Dad walking over “That was quick!” My mam shouted. “Aye well it was a race mam.” I replied. They were then surprised to hear I’d finished third, but never gave me the impression they were upset to have not seem my finish. I cannot blame them, the lure of a burger would have been too great for me if I was in their position.

I went and collected my burger and bottle of beer (which was free with entry!) And enjoyed the evening with my mates and family.

It was a fantastic event. A good tough short fell race and a great craic! Most importantly Nana and Grandad had a good night out.

Well done to Mel Mustafa and everyone at Borrowdale School for delving into the world of race organising. I hope it attracts more people in the coming years as it’s potential to be a real classic race! I really do suggest you come along next year to have a go, and support a great little local school. 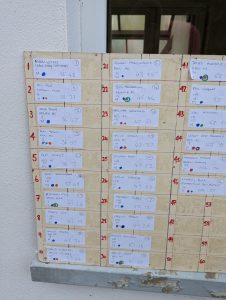