The 22nd and final Anniversary Waltz and Teenager with Altitude races took place on Saturday, and the sun shone to welcome the nearly 900 runners who made the journey to spend a spectacular day racing over the Newland fells. The Waltz was conceived by Steve and Wynn Cliff in honour of their wedding anniversary to raise money for the Newlands Valley and, in later years, the Motor Neurone Disease Association. Tragically Steve finally succumbed to the disease earlier this year, lending a special poignancy to the day, which was organised to perfection by Wynn and their friends and family, many of whom donned wedding attire for the occasion.

In the longer Teenager with Altitude race, where runners take on 15.4 miles with almost twice the ascent of the Waltz, Rob Jebb of Helm Hill led from the off to finish 15 minutes clear of the field, ahead of Ed Ferguson of Borrowdale who was also first U23. Not to be outdone, Sharon Taylor of Helm Hill, Rob’s partner, took the prize in the ladies’ race, finishing 17th overall ahead of Jasmin Paris of Carnethy and Nicky Spinks of Dark Peak. Keswick AC’s Catherine Spurden ran an excellent race to take 5th, ahead of clubmates Cat Evans, Rachel Findlay-Robinson and Sarah Roscoe, running in her first race for Keswick. Adam Lloyd was the first Keswick man home, followed by Simon Netherway, Steve Angus and Craig Smith, who has completed every Teenager race since its inception in 2010. 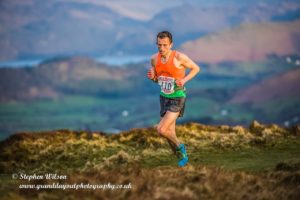