This is the report I really don’t want to be writing. For the third time in my fell running career I’m in the DNF (Did Not Finish) section of the results. Sadly all three have been for the exact same reason. My dodgy digestive system.

My very first was the Buttermere Horseshoe in July 2018. A British champs race which fell 3 days after my very first colonoscopy (see the Lords Seat report for a detailed explanation of the medical procedure!) I tried my best to refuel after my hospital trip, but it was all in vain. Heading up Robinson, I knew I was in trouble that day. I started to stagger about looking for somewhere to go to the toilet. This was made very hard due to the amount of folk racing. I just about made it to Honister. I sat in the toilets and cried. This still remains one of the lowest points of my running career. I remember coming out and speaking to Billy Bland, who was standing with my Mam and Dad, who reassured me I’d done the right thing to drop out as things might only get worse during the second half and then I’d be in trouble!

My second was Borrowdale in 2019. Which is one of my favourite races! It was a baking hot day from the word go! Standing round at the start it was sweating a lot, looking back I probably knew at that point that something wasn’t right. I ended up retiring as early as Bessy Boot. I sat on a rock and tried my best to not let everyone overtaking me see me crying. I ended up having to stop for the toilet a million times on the way back down. I was heartbroken, and felt awful. It felt like my health had improved so much from Buttermere, and I was really looking forward to the race. Yet here I was once again on the walk of shame back to find the race organiser to drop out.

My third DNF sadly came in the Old County Tops…..

On the 5th May I received the following message from Mr Ambleside himself (Ben Abdelnoor) “Fancy doing Old County Tops with me? Tierney’s pulled out.”

I asked when it was and told him that I have always wanted to do it. So I would love to, but I’d not be offended if he got a better faster offer. “There’s a balance to be had of finding someone fast enough AND someone I want to spend eight hours in the company of. You tick the former. I’ll manage the latter” Ben responded. “You old flirt! I’m in!” I immediately replied. I then set about planning how I could get him to wear a Keswick vest for it.

I realised that I was only giving myself 2 weeks to prepare for a 36 mile race. So I decided against doing the races I’d entered, in favour of a few decent recces. The first one was awful. The second one was really enjoyable.

Though I did spend a lot of the next two weeks stressing a little that I’d only be holding Ben up all day. I ended up chewing a lot of my patients’ ears off about the upcoming race and unloading all my feelings on them.

The weekend before was Fairfield. A race at the start of the year I wanted to do well at. With it being only 6 days before OCT I’d just go for a run round. Unfortunately I’d woken up with a rather bad stomach. I decided against going as I’d only make myself worse. Instead I favoured an easy run round Glenderaterra with Rachael May and Hector. I had to turn back for the toilet in the first 5 minutes to leg it back for the toilet.

This partial flare up lasted till Wednesday morning. Not ideal race prep!

The day before I swung round to see Ben to ask some questions about the day ahead. I sat having a cup of tea with him and his parents as we discussed lines, timings and plans. I asked if he wanted to borrow a Keswick vest or if he was going to wear his own, but that didn’t go down very well! As I left he gave me half a dozen eggs. I then proceeded to tell him about my morning breakfast routine. How tried and tested it is, and that I’ll never ever change it as it’s not let me down.

Race day came, and I changed my morning routine. Idiot!

Ben, Britta and Ben’s Mam picked me up early doors and we drove down to Langdale together. I was excited and a little nervous. I sat in the back of the car admiring the trophy, which Ben was returning it on behalf of George Foster and Paul Tierney who’d won in 2019. We went straight through to kit check and then I legged it off to the toilet. My fourth visit of the morning. Just don’t stress about that as you’ll only make it worse by stressing I thought. Looking back I know it should have been a bit of a red flag that I’d not fully gotten over my recent laal flare up. I was determined not to let Ben down today! 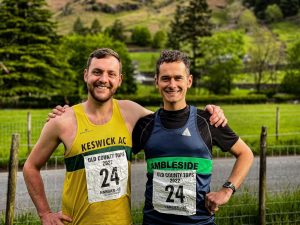 Before I knew it we were off! Trotting along with my pals Joe Morrall (of Ilkley Harriers) and Tom Sabey (Of Netherhall AC) we were having a good time chatting away and the climbs were ticking over nicely. Just before the first hour mark I thought I’d have a bit to eat. As I started to chew into my rice crispy bar I knew I wasn’t actually feeling that good. Just nerves I kept telling myself. We reached the summit as a bit of a group, us four along with Katie and Casper Kaas Sijpesteijn. On the descent I had the all too familiar feeling of really really needing to stop for the toilet. We were however making good ground on folk, and there had been portaloos by Wythburn church earlier in the week so maybe I could nip into there. We reached the church in 2 hours 10, right on schedule. Alas, no toilets. I’d have to hold it in. I didn’t dare eat anything.

Heading up Wythburn there were far too many people to find a quiet toilet stop so I tried to take my mind off it by chatting to folk. I knew I was going downhill as I was chewing each haribo sweet I put in my mouth for 10 minutes. However at the top of the climb it (momentarily) passed. The four of us trotted along happily on a nice bit of a trod. Then suddenly we crossed a couple of becks and the all too familiar cramps in my stomach started. I looked up and realised I was dropping off from the other three quite quickly. I trudged along to Angel tarn, struggling to even drink any water. At the checkpoint I bent down to refill my water and never got going again. The bad weather came in and as we stopped to put our jackets on Ben asked if I was alright (I had told him I was struggling with my stomach at this point) and I burst into tears. I felt like I’d let him down and that once again I was back at square one with my Crohn’s.

“In all seriousness mate, if you’re not feeling right now there’s no point in carrying on. It’ll be 4 hours from here if we do” Ben said. It would also mean getting cold and more miserable on top of all of this as the weather was getting worse. I knew I wasn’t going to make it round today or I would only be forcing Ben to get cold and considerably slow us down. Then who knows what might have happened.

So we started the walk of shame. Ben told me that he believed himself to be jinxed as he’s now had to retire from this race more times than he’s finished it. All times have been due to his partner not doing too well I should add! I was feeling very dizzy and sick as we headed further down. Just praying to find a toilet very quickly.

Once back I got myself straight into the toilet for a while. Cried some more, and felt proper sorry for myself. Whilst Ben contacted Britta to come and pick us up. I didn’t dare eat anything knowing that it would only go straight through me.

Sitting in the marquee waiting Ben seemed to be enjoying chatting to folk whilst sampling a few different cakes. I felt a bit overcome with my emotions. I know I am generally a lot better and healthier than I have been in years, but it felt like I’d taken a lot of backwards steps.

My least favourite part of having Crohn’s disease is the feeling of your body not functioning properly and essentially going into shut down mode. You do not have the energy to move, think or speak. Your entire body aches, your ears are ringing and it’s very hard work to stay positive. Whenever this happens I try to hide myself away from people as best as I possibly can. I hate people seeing me in states like that, as I am just absolutely miserable. I try to not even let my family see this side of my illness these days. 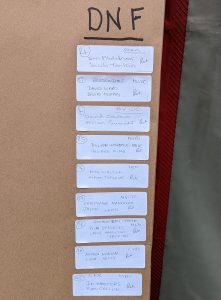 Ben and I did however manage to top the DNF leaderboard. So I did have to take a picture of it to keep as a bit of motivation to not let this happen again. Hopefully I will learn from the mistakes and come back to finish this race next year. I certainly need a bit of time to figure out this recent flare up and how I can avoid it again. I do not ever want to retire from a race for this reason again.