You can tell by the way I dedicate myself to sartorial elegance, always having perfect hair and makeup, and carefully chosen matching outfits – I must have style in my genes. It’s true (honestly now) my grandfather was a hairdresser as was my great-grandfather and my great- great-grandfather and who knows how much further back. What I did not know until relatively recently is that the middle of these grandfathers, Jack Nowell, founded Gateshead Harries in 1904. This knowledge came as a shock to me and forced me reconsider my background – maybe there was some good in it? And one day I had the idea that I must run to Gateshead to pay homage to Jack Nowell. But it was one of those ideas that is like poem, you don’t really have it – it has you. And it only makes sense as a metaphor. 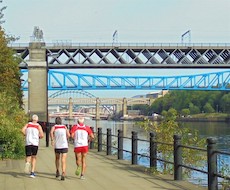 There’s a lot more to this story but suffice to say that last Sunday, on the 40th anniversary of the Great North Run I set off. I ran from home via the old coach road, Gowbarrow, Askham fell and on, and on… over the Eden valley, a night in the van, then over High cup nick, Teesdale and Weardale moors, another night in the van then on to Gateshead Stadium. Two of the Harriers met me to run the final mile and a lap of the track and at the finish were the Gateshead Harriers Olympians Angela Gilmore and Brendan Foster. We had some great craic. Brendan said all the fellrunners he knew always had terrible trouble buying trousers because of big thighs – not sure what he was implying there! I wore their vest with pride and no conflict to my Keswick Loyalty, just it was a bit mucky after 3 hot days but then Brendan and Angela signed it so it can never get washed. 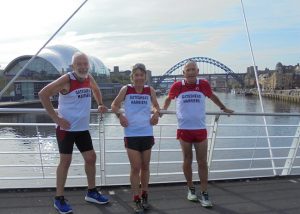 Jack Nowell was a man of meagre means in a TB ridden community. He founded a wonderful club and saw it through a world war, a pandemic, and a great depression. It turns out my ancestors have plenty in the way of lessons for me. Too much to live up to I can only try. I have made a start by getting a hair cut. 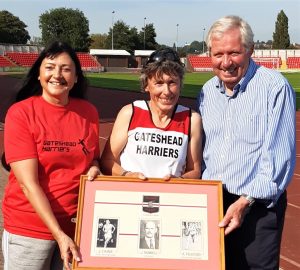