Peter Trainor recently got in touch with Trudy, our KAC secretary in 2020…

(If you have any photos or records of races and would like to share them with us and have them kept on our website, please get in touch with our Webmaster.) All results for the London Marathon, run by our club members, are now on our website HERE.

Until I received the photo I was unaware he was there but No 0695 in the photo (in the Union Jack shorts) is Mike Hobden of Louth AC, who also was a fell runner who ran in classic Lake District races.

I was freshly off a plane from the Middle East at the time so didn’t know who else from Keswick was competing, but the results I have include the following:

134th  Jon Broxap    2:29:24  (Jon finished just ahead of 1st Lady, Joyce Smith so appeared often in the BBC’s showing of the race and in the abbreviated version that was shown at the time of this year’s postponed event).

I’m not sure whether these were our Keswick guys but my results also show:

I competed in a few more London Marathons in the 1990’s and if I find my times for those I’ll forward them to you. 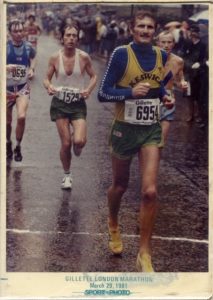