Thirteen members of Keswick AC went off to the last of the Lake District Classic series at Langdale.  This is a very technical course and regarded by many as the most challenging as route choice can be critical.  The low cloud over Bow Fell and the Crinkles made navigation tricky.  The route starts at the Old Dungeon Ghyll and runs under the fell side, up Stickle Ghyll and out on to Thunacar Knotts.  Then running west across Martcrag Moor, where runners have been known to sink waist deep, down to Stake Ghyll, up round the back of Rosset Pike and along to Angle Tarn.  Up to Esk Hause and then, oddly, turning sharp left and contouring under Esk Pike to Ore Gap, Bow Fell, Crinkle Crags follow and at last some lovely running over to the Pike of Blisco and back to the start.  It is an extraordinarily muddy route with a lot of very slippery rock making it a demanding and leg sapping 14 miles with 4000 feet of climbing.  The women did well with Lucy Burnett finishing 10th out of 60 runners and 3rd V40, Rachel Findlay Robinson came in 20th, Charlie Bradshaw in 34th and Lesley Malarkey 47th out of 60 women runners.  Lesley became the first V70 lady to complete the course and also came 2nd V60.  KAC’s men were also well represented in a race dominated by the legendary Finlay Wild.  Keswick’s Carl Bell was 3rd, Brennan Townshend 5th, Calum Tinnion 10th, Matthew Atkinson 20th.  These guys very narrowly missed the team prize which went to Ambleside.  Also running well were Dave Birch 3rd V50, Jacob Tonkin (who set an amazing PB), Jamie Lawler, Mark Webster and Rob Allen.

There was also a great turnout from Keswick AC at the Cumbria Cross Country League in Penrith, particularly from the women.  Monty Holmes, Ben Nutter, Ellie James and Charlie Rennie represented Keswick in their respective junior categories while the men’s and ladies races were both won by Keswick AC members John Battrick and Jenn Bell.  In the ladies race Trudy Beetham was 5th overall and 2nd V40 and Lindsay Walker 8th and 3rd V40.  Debbie Charlton, Nicky Butler, Clare Warner and Sally Nutter all represented Keswick to help the women to win the first team points.

On the roads Craig Marsh set an amazing personal best at the Manchester Half Marathon, running 1hour 23 mins. 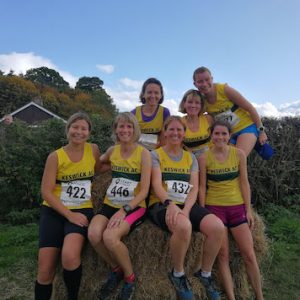