Sunday sees the first anniversary of Keswick junior parkrun. The event, which is held each Sunday morning at 9am in Lower Fitz Park has become established and we have had an average of 33 runners over the year. Though this figure is nearer 40 if you look at more recent weeks. Sunday will be our 51st event, we’ve had two cancellations; one due to the Beast from the East on 4th March when four inches of snow and ice were deposited on the course and to allow for the Scruffs Dog Show to set up on 1st July.

Some stats for you: over the year, we have been host to 496 different runners, representing 40 different running clubs. Our biggest attendance was 57 on our second week and on Easter Sunday. There have been 1,681 completed 2km runs, which cover a distance of 3,362km. And we have seen 371 PBs achieved. The average run time is 12 minutes and 21 seconds. And the total time spent running at Keswick junior parkrun, so far, is 14 days, ten hours, one minute and 50 seconds.

When children run eleven, 21 or 50 junior parkruns, they have run the equivalent distance of a half-marathon, marathon and ultra marathon respectively. To recognise this impressive feat, they are awarded a wristband. These have become coveted items and have proved to be an incredible incentive.

We will be having birthday cake and juice for finishers on Sunday and ask all 4-14 year olds to come down to Lower Fitz Park at 9am on Sunday and maybe we can beat our attendance record. 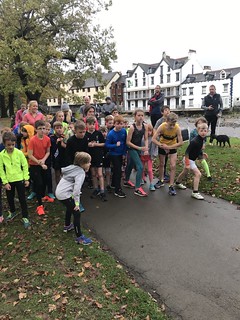